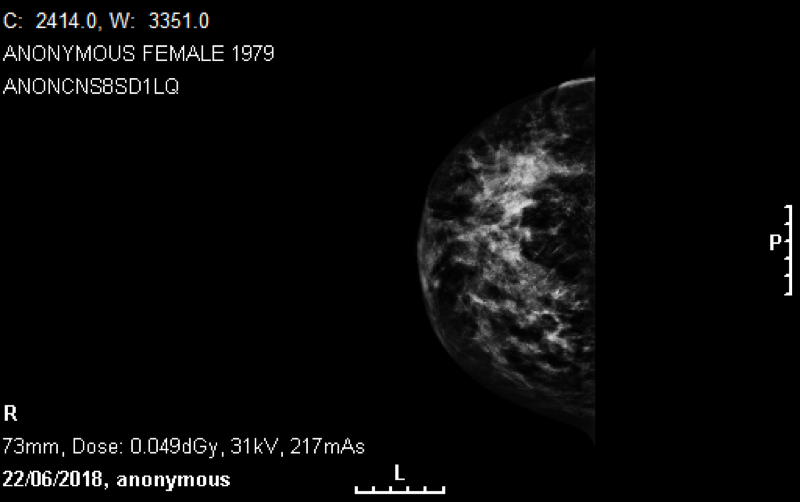 A case study on the use of ultrasound in breast biopsy

The subject of this case study, which included the use of ultrasound to guide biopsy, was a 39 year old female, gravida one, 38 weeks gestation.

She presented with a non-tender mobile breast lump in the right upper outer quadrant of her breast. The lady had noticed an area of hardening breast tissue over the previous month.  The breast surgeon, on clinical examination, suspected that it was a galactocele, which is a milk filled cystic lesion usually associated with women during pregnancy or lactation.

The ultrasound examination was therefore used to assess the affected breast for lesion size and focality, and the contralateral axilla (for staging) using ultrasound imaging. Mammography would also be undertaken and the patient referred for further care and treatment as appropriate.

A targeted ultrasound scan of the right breast was performed, which demonstrated a hypoechoic ill-defined area of textural change in the upper outer quadrant, which could be due to infection. The differential diagnosis was, however, breast cancer.

Mammograms were also performed. The sonographic appearance of breast tissue is usually a mix of bands of fatty and echogenic (glandular) tissue. During pregnancy and lactation there is an increase of glandular tissue and the echogenicity of the breast increases. Often prominent ducts are seen deep to and surrounding the nipple areolar complex. The scans in this case demonstrated an increased density and trabecular pattern with some microcalcification and associated skin thickening in the right breast. The appearances were suspicious for cancer.

An ultrasound guided core biopsy of this region was then performed under local anaesthesia. The core biopsies were taken for histology and microbiology analysis. This was to confirm cancer and to rule out infection as the underlying cause.

In the contralateral axilla, several abnormal appearing lymph nodes were seen on the ultrasound examination (thickened cortices/lost morphology). Fine Needle Aspiration (FNA) of the most abnormal one was also performed under ultrasound guidance to assess for any metastatic spread to the lymph nodes.

In young patients, an MRI of the breasts is typically performed to provide a more sensitive assessment of both breasts and confirm the dimensions of the cancer present. At this stage in pregnancy, MRI is not possible. This patient’s pregnancy was induced immediately after diagnosis and MRI was subsequently performed.

Histological core biopsy results identified a grade II invasive lobular carcinoma. No infection was seen in the microbiology specimen. The FNA of the axillary lymph node was insufficient so a core biopsy was subsequently performed under ultrasound guidance demonstrating metastatic carcinoma cells. Soon after delivery, the patient was then referred for CT staging of her chest, abdomen and pelvis and a bone scan.

No evidence of metastatic spread was seen on the CT scan or bone scan. The patient underwent a wide local excision of the right breast and axillary clearance which was followed by chemotherapy and radiotherapy. She remains in treatment and will have regular follow up for five years. Her baby was safely delivered and is fine.

Pregnant women with breast masses should be treated the same as someone who is not pregnant, whereby a similar protocol for imaging is carried out. Ultrasound would be the first preferred imaging modality in all ladies but mammography can still be performed safely.

It is important not to assume that the patient has an infection, which is a common cause of breast lumps during pregnancy, but to assess for carcinoma by performing image guided biopsies if there is any suspicion. FNAs in the breast tissue during pregnancy are often difficult to analyse and core biopsies should be taken in the breast wherever possible.