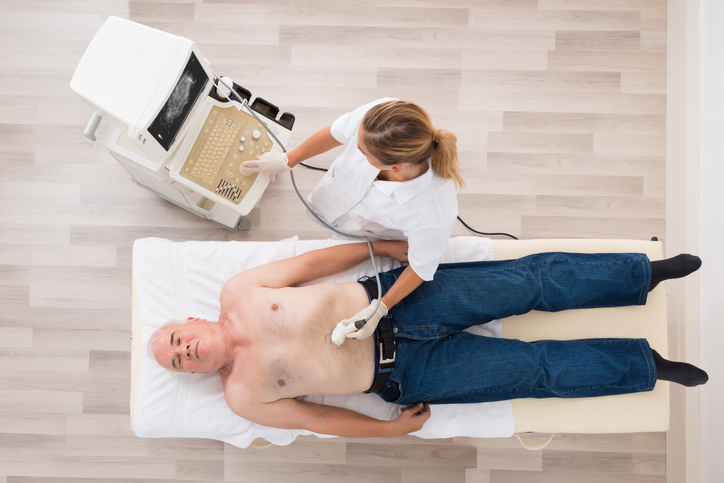 AAA: the screening programme that has cut early deaths by half #MUAM

It is our intention during the month of October to celebrate all things ultrasound and to highlight the contribution sonography and sonographers make to patient care and management.

One of the great success stories in the last decade has been the national roll out of screening for abdominal aortic aneurysm in males aged 65 and over. On-going surveillance of any aneurysms found is also included in the standard operating procedures, along with referral pathways for treatment when necessary. AAA screening is one of the 11 national screening programmes under the auspices of the National Screening Committee, which is part of Public Health England.

Ultrasound is key to the screening programme because it is used to measure the maximum antero-posterior diameter of the abdominal aorta between its inner walls. A measurement of less than 3cm is considered normal.

I started my role as professional officer for ultrasound for the SCoR in 2008 when the programme was just emerging from the first pilot sites. I have been able to see how it has been carefully developed by the programme team with vascular surgeon Dr Jonathan Earnshaw as clinical lead and rolled out across the UK.

There has been a special emphasis on co-operation between the four UK countries which, although having separate programmes, have worked closely together. A new workforce has been trained (the ‘screeners’) who are supported by qualified sonographers acting as supervisors and clinical skills trainers within the individual local and national programmes.

In England as at July 2018 over 1.3 million men aged 65 and over had been screened, 16,000 aneurysms detected and 4000 individuals referred for treatment. There has been a 50% reduction in AAA related deaths in the first decade of operation.

There is also a wealth of data relating to AAA aetiology, diagnosis, surveillance and treatment that has been amassed. Experienced researchers and research teams are able to apply to the screening programme to access the data. Many papers have been published and are in progress as a result.