Until recently trans-abdominal ultrasound was rarely used for bowel assessment due to its difficult visualisation. Endoscopy, MRI, CT, and conventional radiography were the preferred imaging methods.

However, over the past few years technological advancement and the increasing experience of ultrasound practitioners has meant that ultrasound is now an important tool for visualising bowel pathology, giving practitioners the ability to diagnose a range of different pathologies such as colorectal tumours and bowel inflammation.

My experience
In my local hospital, bowel ultrasound is now common practice as a first line and surveillance test for suspected bowel inflammation such as Crohn’s disease, providing a sensitive, safe and inexpensive diagnostic tool.

Advanced practitioners, such as myself, have developed a new role in performing gastro-intestinal (GI) ultrasound of the bowel, following training by experienced GI consultant radiologists, providing an effective and efficient service for patients.

Further evaluation of specific bowel segments and pathology is then undertaken using a high-frequency transducer, due to its greater resolution. 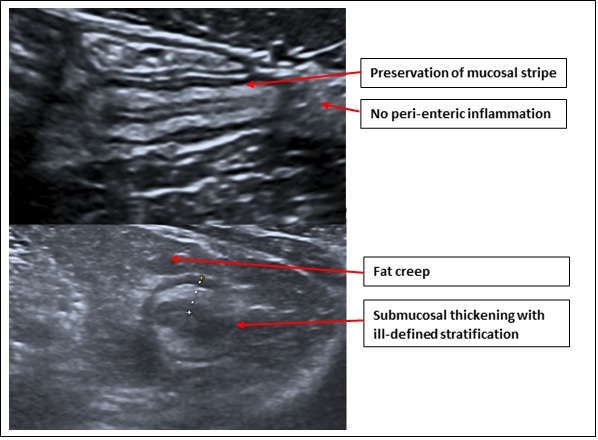 Small and large bowel - have ultrasound characteristics that allow for a systematic interpretation of location. The colon is located framing the periphery of the abdomen with the only fixed locations being the ascending and descending colon. The transverse and sigmoid colon can differ in location and size between patients due to different lengths of individuals’ mesocolon. Small bowel is more moveable with an indistinct course, however in the majority of patients the jejunal loops can be seen within the left upper quadrant of the abdomen and the ileum can be found in the mid to right lower quadrants, with the landmark of the terminal ileum proximal to the ileocecal valve.

Wall layers - A single wall layer thickness of 2mm is considered normal in a distended healthy segment of bowel. Bowel wall is made of distinct sonographic layers: lumen, mucosa, submucosa, muscularis propria, and serosa, with the five interfaces being visualised on ultrasound (inner-outer). The layers are distinct due to the alternating echogenicity, with the most common layers visualised being the white submucosa and the dark muscularis. The layers should be symmetrical and clear in healthy bowel, loss of differentiation can indicate pathology such as cancer and/or inflammation.