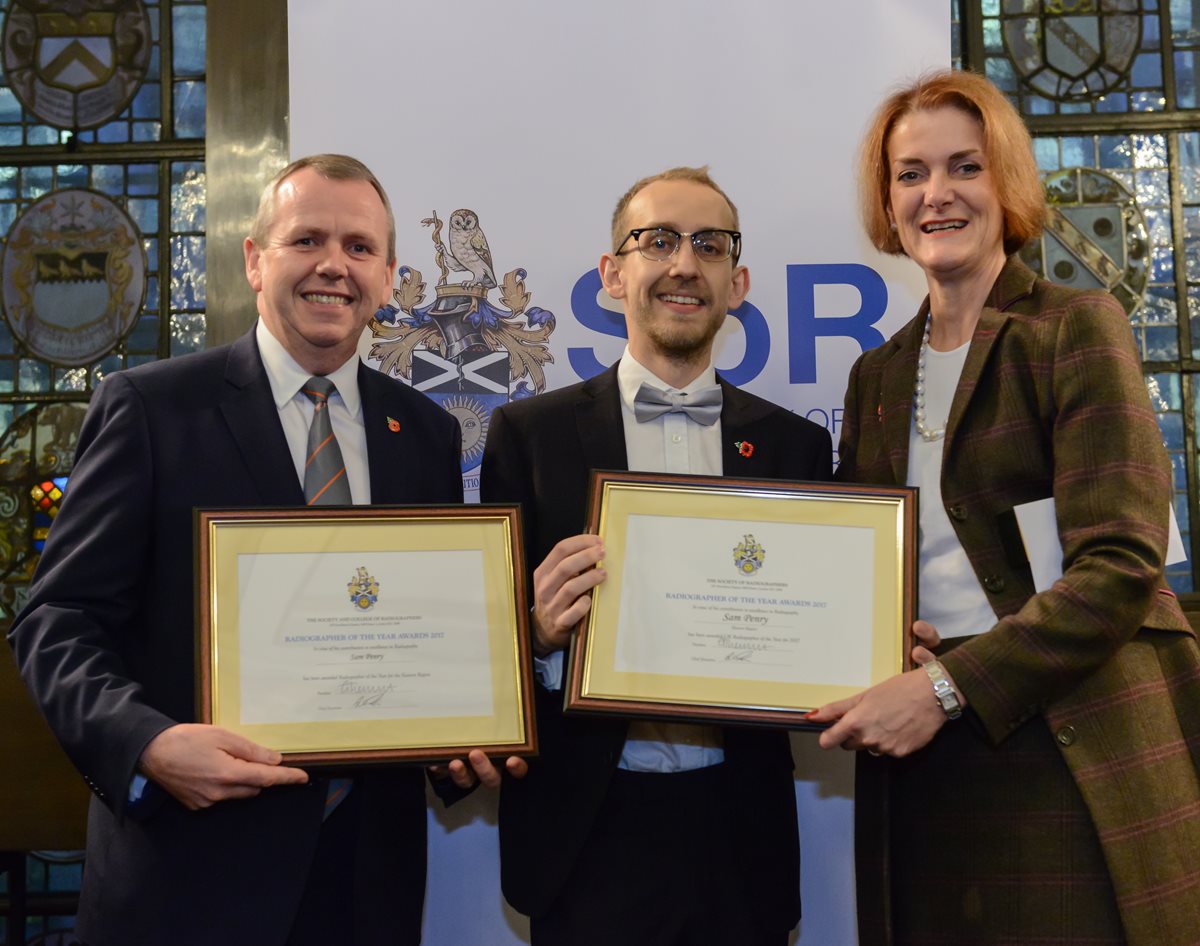 2017 Radiographer, Team and Students of the Year collect their prizes

The 2017 SoR Radiographer, Team and Students of the Year picked up their prizes at a ceremony which took place at the Law Society, London, this month.

“Today we celebrate extraordinary radiographers who lift up our spirits, strengthen our union and push us towards progress,” he said.

“I always love this event, but this is an impressive class. We’ve got innovators, dedicated public servants and change agents.

“We pay tribute to these dedicated radiographers who punch through that glass ceiling to transform daily working practices to provide the best possible care for the people we serve; our patients.”

The 2017 Radiographer of the Year and the winner of the Eastern Region award was Sam Penry from Broomfield Hospital in Essex.

Introducing Sam, Gareth cited his passion for research and the profession as the chief reasons for his success.

“But these are only part of the reason why he’s a worthy winner,” Gareth said.

“His cheerful and friendly demeanour and willingness to help colleagues mean that he’s cherished and revered in his department, and a real asset to our profession.”

Sam recalled the moment he found out he won the prize: “I was working in the x-ray department at the time, and there was a very formal letter in the inbox telling me I’d won.

“I was overwhelmed, it was phenomenal and it didn’t sink in at the time.

“My colleagues were so proud and I got some lovely feedback, I love working where I am.”

London region took the UK Team of the Year award thanks to the radiology team at King’s College Hospital.

They were praised for their outstanding response in the face of extraordinarily trying circumstances, including the London Bridge terror attack and the Grenfell Tower fire.

Gareth praised their ‘resilience, ability to rally round and absolute focus on helping their patients’, qualities, which saw them come through the most difficult circumstances.

He added: “They define what a radiology team is all about.”

Also present were the diagnostic and therapeutic students of the year, from the University of the West of England - the first time both student award winners are from the same institution.

Receiving the diagnostic award was Laura Bonner, who was praised by Gareth for being an inspirational role model, overcoming dyslexia and showing remarkable determination to qualify as a radiographer.

“Laura was a highly popular student with patients, academic and clinical staff. She has a passion and gift for connecting with people of all ages and backgrounds.

“I’m sure she will be an asset to our profession.”

Laura said she was ’speechless’ when she found out she had been nominated.

“I found out on my graduation day! My tutor Janice St John Matthews and module leader came over and said we’ve got really exciting news. I was wondering what it was because I’d already graduated,” she said.

“They said they’d nominated me and I was really shocked.

“It didn’t sink in for ages, I was speechless!”

Amy Walkman made it a student double header for UWE, winning the therapeutic award.

“Amy excelled in her clinical practice, with supervisors noting her proficiency and outstanding talent,” noted Gareth.

“She couples this with her empathetic approach to patients to make a formidable combination.

“The Christie, where Amy has recently started working, have gained a great radiographer.”

“I was really shocked and didn’t expect it at all!” commented Amy.

“I’ve been at The Christie for four months, there’s been a lot of support from the team and it’s been a really great experience.”

You can read more about the winners in the awards brochure.

UK and Eastern Region Radiographer of the Year - Sam Penry from Broomfield Hospital.

Scotland Radiographer of the Year - Margaret Low from Ninewells Hospital.

Wales Radiographer of the Year - Julie Burnage from Diagnostic Healthcare.

Diagnostic Radiography Student of the Year - Laura Bonner from University of the West of England.

Therapeutic Radiography Student of the Year - Amy Walkman from University of the West of England.

Northern Radiography Team of the Year - Reporting radiographers from City Hospitals in Sunderland.

Radiography Team of the Year for Yorkshire and North Trent - Ultrasound Team from Sherwood Forest Hospitals.