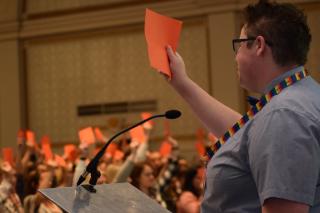 ADC show the ‘red card’ to Ayrshire and Arran

A mass of red cards were on show at this year’s Annual Delegates Conference as delegates stood to demonstrate their support for colleagues at NHS Ayrshire and Arran.

Years of allegations of bullying and harassment by line managers at two sites has led to a formal grievance by more than half of the Society members employed. Eighty-five radiographers have made the complaint, with 16 others considering adding their names to the grievance.

Aggressive behaviour and lack of empathy and support for staff who are upset or distressed, has led Society members to take action.

“We have been trying to have the issues about the behaviour of certain line managers to be resolved without having to take formal action,” commented Deborah Shepherd, the SoR national officer for Scotland.

“A meeting with the chief executive of NHS Ayrshire and Arran, John Burns, failed to happen and members feel that the health board isn’t listening and doesn’t care about how they are being treated.”

A front page story in the Glasgow Herald, has highlighted the dispute and the SoR action.