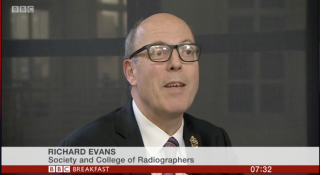 Coverage has included a story on the BBC News website, saying that the lack of radiographers is likely to be a key cause behind patients having increasingly long waits for diagnostic scans.

Richard also appears in short interviews on BBC Television which is being broadcast in bulletins throughout today. The first was on this morning's BBC Breakfast at 7.31am, which is available on iPlayer.

There was also a report by health correspondent Nick Triggle on the Radio 4 Todayprogramme five minutes into the show.

A Freedom of Information request to hospital trusts and boards across the UK shows that one in 11 diagnostic radiographer posts are vacant.

The BBC claims that there are more than one million patients waiting for tests, such as MRI and CT scans, ultrasounds and endoscopies across the UK. The number of patients waiting longer than six weeks in England has risen by 9,000 in England to nearly 29,000 in the past year. One in seven has waited more than three months.

Only in Wales has the situation improved.

In the interview with the BBC, Richard said, "If we are going to identify things like cancer early we need more diagnostics.

"We are struggling to cope with demand and that creates delays for patients.

"It is not just about staffing either. We have ageing machines that are not as efficient as they should be."