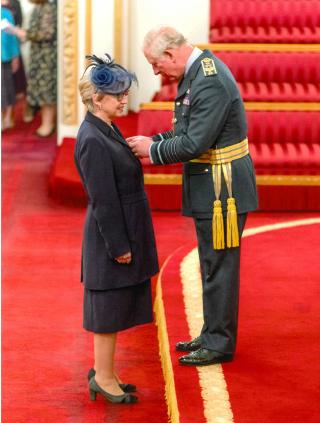 Christine Richards to retire after 47 years

She joined the trust in 1990 after qualifying as a radiographer in 1972 and has been at the forefront of projects to improve patient care.

Christine won South East Radiographer of the Year twice, in 2015 and 2018 and, last year she received an MBE from Prince Charles at Buckingham Palace for her services to cancer patients.
She was the chair of a SCoR working group on skin care for radiotherapy patients and worked on projects to enhance staffing standards for therapeutic radiographers.

Christine said, “I will miss the people because it’s such a friendly atmosphere here and I’ve worked with some of my colleagues for many years. I’m also going to miss the patients because being part of something that is going to make such a difference to someone’s life is so rewarding.

“Everyone at MTW really respects one another and works as a team to help our patients and it’s been a real honour to work alongside them all for so many years.”

She is looking forward to holidays to Italy and France.