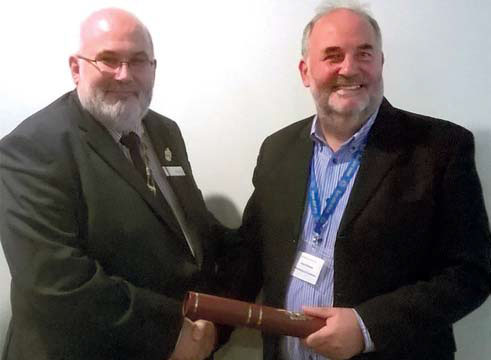 SCoR President Steve Herring presented Ken Holmes with the Fellowship of the College of Radiographers at the successful North West regional study day at Blackpool recently.

Ken qualified as a diagnostic radiographer in December 1976, gaining his first post as a radiographer in West Bromwich the following year. In 1985, he entered teaching as the deputy principal at the Wolverhampton School of Radiography.

Ken’s first university post was at the University of the West of England (UWE) where he developed and managed the MSc in Nuclear Medicine, the first course in the world to have a Masters module in non-medical reporting in nuclear medicine.

After a short time at Salford University, Ken moved to his present post at the University of Cumbria as the programme leader.

During his time in radiographic practice and education, Ken has obtained a number of qualifications and in 1994 attained his MSc.

Ken has been a member of the SCoR since qualification and has been a regional committee member virtually continuously since 1983. He has been an accredited SoR rep for almost 40 years and is a regular attendee and speaker at the Annual Delegates Conference (ADC). He has held the post of chair of ADC 1995/6, sat on Delegates Conference Committee and been an elected observer to UK Council.

Ken has authored more than 75 publications, presentations and posters and has recently contributed chapters in the 13th edition of Clark’s Positioning in Radiography.

During his career, Ken has had a hand in training more than 1000 students and strongly supports the training of radiographers to understand and interpret their images. Ken says he has seen vast improvements in the skills and abilities of graduating radiographers over the years.

The profession is proud to recognise that these improvements are due in no small part to his contribution.

Congratulations to Ken on receiving the Fellowship (by portfolio) of the College of Radiographers!