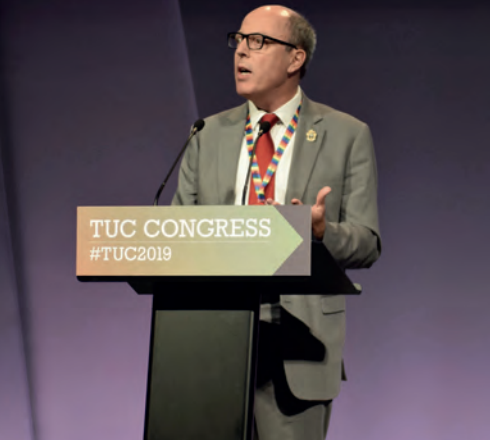 Exclude the NHS from trade deals

Congress at TUC 2019 was reminded by the Society's CEO that “despite international comparisons that show clearly that the NHS is by far the most efficient healthcare system, politicians... seem convinced that the system is broken and can only fixed by commercial interest.”

Richard Evans said, “We need to protect the NHS. We need to build a wall!” Seconding the British Dietetic Association (BDA) motion, The NHS and Future Trade Deals, on behalf of the SoR, Richard continued, “In this congress, we can proudly say that the dangers of erosion of the principles of the NHS have been repeatedly highlighted and opposed. But in wider society our views are viewed as paranoia.

“Everyone loves the NHS. But no one seemed to value it enough until Mr Trump opened his mouth! Suddenly everyone knows that the NHS is a target for big business.”

The motion calls on the TUC General Council to demand that the NHS is specifically excluded from future trade deals.

The BDA motion says that, “Congress is alarmed that during his visit to the UK in June, President Trump asserted that the NHS would be 'on the table’ in any future trade deals with the US ‘or a lot more than that’.

Richard told congress, “The NHS is in danger from unrestricted price hikes, competition for service provision and, ultimately, a deconstruction of the fundamental values that ensure free access for all.

“This congress will never be silent whilst the NHS is under threat. But what Donald Trump has achieved is to get everyone talking about protecting healthcare."