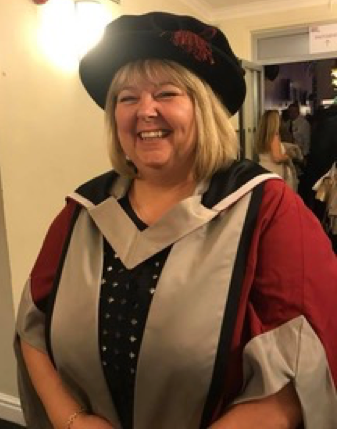 My radiography life began as a late entry applicant into a local diagnostic radiography programme. I had given up my hopes and aspirations to become a diagnostic radiographer a few years earlier when my secondary school science teacher had told me girls didn't do science. He had no expectations of me passing my biology and chemistry exams and actively discouraged me from taking physics.

The school careers advisor later confirmed that without physics, diagnostic radiography was not an option. Nursing seemed a viable choice. I decided the best option would be to enrol at college on a pre nursing course and throw a couple (or 3!) of A-levels into the mix whilst I waited patiently for my 18th birthday and the entry age for nurse training.

Two years later I had a place to start nurse training when I spotted a course advertisement in a local newspaper for radiography commencing in two weeks. It did not require physics O-level and so the journey from ‘almost nurse’ (with science A-levels passed) to PhD sonographer began.

I don't deny the physics content of the radiography curriculum was a challenge at times, but I completed the course and exited with two student prizes: for best clinical student and best academic achievement. I was one of the last Diploma of the College of Radiographers (DCR) cohorts through the then Derby School of Radiography. I started my first job as a radiographer and enrolled on a two year course in the evenings to top up my DCR to a BSc.

My interest in ultrasound was sparked whilst on placement as a student radiographer. I was fascinated by an obstetric dating scan that revealed five babies! This passion was further ignited as a newly qualified radiographer spending time in ultrasound, assisting the radiologists as an overpaid imaging assistant.

A few years later a rare opportunity arose to train as a sonographer, which I jumped at and was selected. I really enjoyed everything about the role, the variation, the autonomy, and the patient contact. I progressed to lead a dedicated service in early pregnancy assessment. I also enrolled to complete my MSc and started to become more involved in student training, both clinically and at the university.

Another spark was ignited, a passion for teaching. I became a full time lecturer and course leader and started to think more and more about the doctoral route. I also held a strong desire to secure the sonography workforce as a profession in its own right, rather than being an extended or advanced practice of another profession. It therefore seemed a natural progression to merge my thirst for learning, passion for ultrasound, training, and desire for workforce transformation, together in a doctoral journey.

The expedition took four and a half years to complete on a part time basis, whilst working as a full time member of the academic team. One of the hardest parts was to narrow my ideas down. I wanted to do research so much that a more narrow focus was essential. With the help of key colleagues, this was eventually achieved and ethical approval was granted.

Starting the literature search was a major hurdle. I worried whether I would do it correctly, or would I miss something really fundamental to the research? I can honestly say this was the hardest part, as was well documented in my reflective diary of the time! However, once I started writing it flowed and flowed and flowed!

My research used a qualitative grounded theory methodology which felt, at times, a little 'out of control', not knowing where the research would lead. This seemed like an alien concept to someone who had previous experience of quantitative methods and relied on a more black and white model. Is something present, or not?

I had also heard people talking about grounded theory as a massive undertaking, which also seemed rather scary. The best advice I was given was to keep reading. It enlightened the methodology and allowed me to make an informed judgement.

The best advice I can now give those of you considering or embarking on a doctoral programme is use the support around you, whether this is from colleagues or information systems such as referencing and data analysis tools. They give support and reassurance. Keep reading and document all your decisions; these will be invaluable at the writing up stage and viva.

Never give up. You can and should do it.

The doctoral experience changes you as a person, it prompts you to question, classically with the 'so what?' question. It does make you re-evaluate and changes your focus.

Yes, it was hard going at times; constantly fraught with self doubt in the early stages and, at points, seemed unachievable. But just like science O-levels, it is achievable and it is definitely worth it. The sense of achievement on completion is like no other.