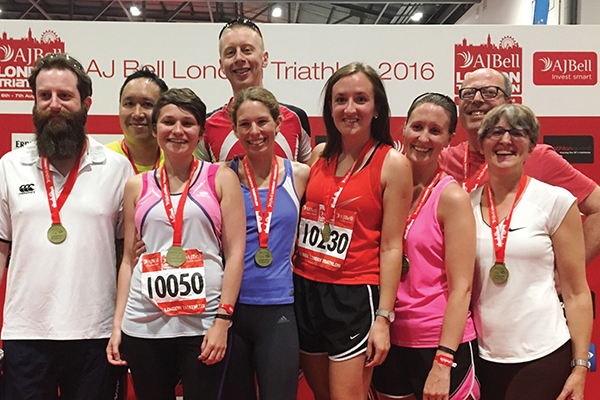 Have you been active in August?

Hundreds of allied health professionals took up the challenge to get more active in August, thanks to a initiative launched by the founders of the Twitter group @WeAHPs.

Radiographers were among those who pledged to get fitter and joined other professionals, including physiotherapists, speech and language therapists, police officers, doctors and nurses, in tweeting photos of their activities.

The different professions went head-to-head to climb up a leader board and win virtual medals, which provided plenty of healthy competition and excitement.

Staff based at the Society’s headquarters (see picture) did the profession proud; three teams successfully completed the London Triathlon.

The WeActiveChallenge is the brainchild of Dr Joanne Fillingham, Naomi McVey and Helen Owen, founders of the successful @WeAHPs group on Twitter, which is one of several ‘WeCommunities’.

Joanne, who is the clinical fellow to the chief allied health professions officer and runs the Twitter group voluntarily, said she has been overwhelmed by the interest shown.

“We launched the idea on Twitter last year and were flabbergasted by the interest. This year is the first time we’ve opened it out to all of the WeCommunities and we’ve been completely amazed by the positive response.

“The challenge has motivated so many people to get more active than they were before. We all know that this is good for our physical health, as well as our general wellbeing, and we feel it’s important as healthcare professionals to be role models for our patients, and show that a bit more activity can go a long way.

“For me, the most inspirational photos are not necessarily those of people doing long bike rides or marathons, but those who are mowing the lawn or jumping on the trampoline with their children -activities they may have previously watched from the sofa.”

Joanne says that radiographers have been instrumental in making this year’s WeActiveChallenge a runaway success.

“The radiographers have been brilliant,” she says. “We’ve had great engagement from them. They have a great model of engagement on social media through @MedRadJClub, as well as other groups. We’re big supporters of one another; I think it’s important to form partnerships on social media.”

More initiatives are in the pipeline and those radiographers not yet on Twitter are urged to sign up. Naomi McVey, programme manager for AHP workforce for Health Education England’s North West team, adds: “The radiographers have been getting involved in many of the @WeAHPs tweetchats and the WeActiveChallenge.

“Another campaign we’re supporting later this year that they can get involved is Fab Change Day. We’d love to see radiographers take part in that too.

“This has been an incredible opportunity to bring AHPs together,” concludes Joanne. “It has been very inspiring because we can learn so much from each other and be such a stronger voice together.

“We’re all doing the same thing, so let’s just learn from each other!”

@WeAHPs is a virtual community launched in February 2015 on Twitter. It forms part of, and is supported by #WeCommunities. The community’s objectives are to:

The #WeActiveChallenge launched in August 2015 following a tweet chat about public health. More than 2500 professionals have taken part.