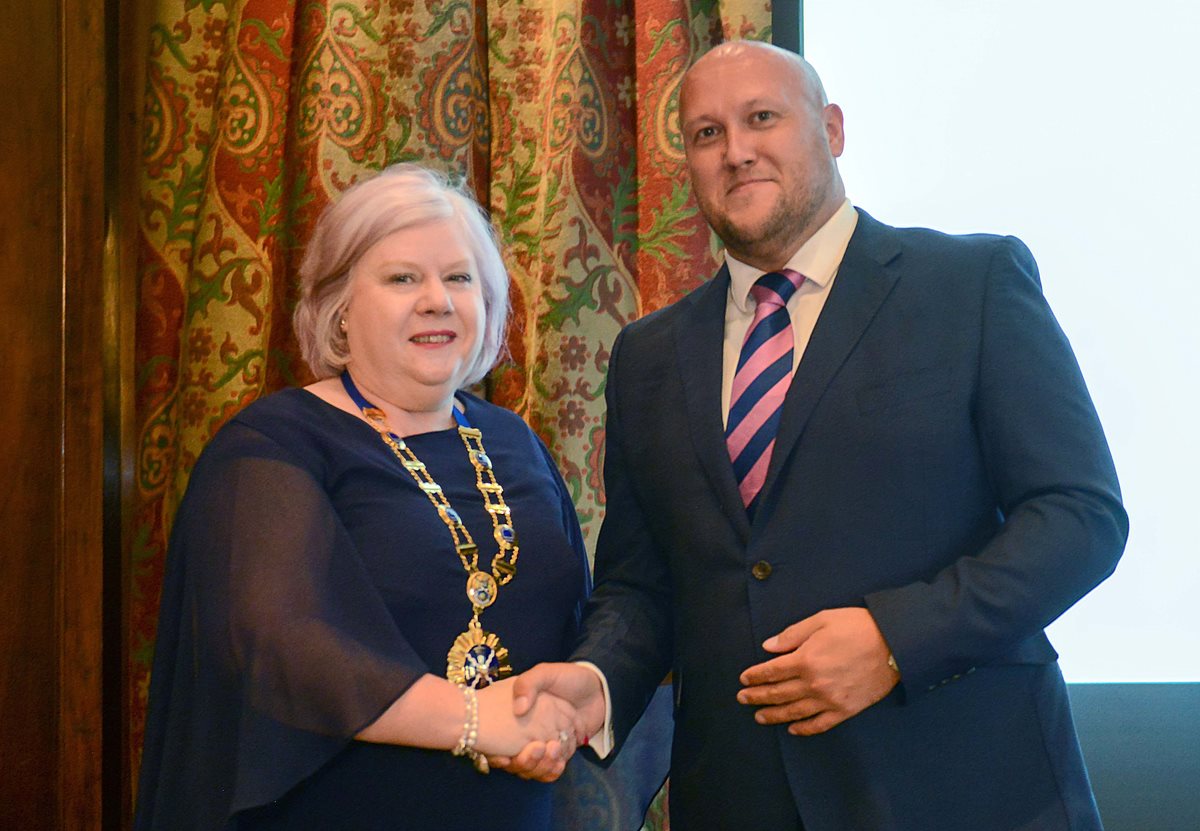 "I am immensely proud to be a radiographer"

Even the lure of England playing Croatia in a World Cup football semi-final did not deter distinguished guests and supporters of the profession turning out in force to see the 2017/18 President of the Society and College of Radiographers, Gareth Thomas, hand over the presidential 'gong' to Sue Webb, a diagnostic radiographer at Broomfield Hospital, Chelmsford.

Admitting that she "found it a bit unbelievable" to be president, Sue noted the "passion and pride" of her predecessors and said that she shared their "commitment to promote radiography in the wider field of healthcare and beyond, to meet and engage with our members, and to encourage research in order to improve outcomes for patients, and to advance the profession."

She also described her path into radiography, which came about because of her late husband's illlness.

Nearly 30 years ago in 1990, I was 30 years old and had been married to my childhood sweetheart, Malcolm, since I was 17. He was a farmer, tall and strong, and we had two lovely children. We lived in a small village in rural Essex. I had a part time job in a nursery school and life was good.

Malcolm began to suffer back pain. At first, the GP refused to send him for x-rays as he said they never show anything and the pain was down to his job.  Eventually it became so severe Malcolm could hardly walk and the GP did send him for x-rays.

My first encounter with a radiology department was the nice lady in a white coat who kept coming and taking him back for ‘one more picture’. He said they were putting him in strange positions. There was no CT at that hospital, and MRI was far in the future. Malcolm was admitted to hospital two days later and the diagnosis of a rare tumour of the lumbar spine was made. He was told of the diagnosis alone and that he had two years to live by a doctor with no name that he could remember. Not the level of care we should aspire to.

A roller coaster 18 months began. He had daily radiotherapy and came home in less pain and we hoped for the best. Sadly, he developed lung secondries and they started him on chemotherapy.  Over the course of his treatments we experienced some great care and some appalling care! The best care was usually in radiotherapy and x-ray departments. Sadly, he died in October 1991. I discovered what radiographers, both therapy and diagnostic, do and became fascinated by this unknown and technical world.

I spoke to the radiographers, who were kind and encouraging, and decided to apply for the new course in diagnostic radiography at Charterhouse University. A year after Malcolm died I started it and with the help and support of my family, particularly my children who luckily survived being partially abandoned while I travelled daily to London when in uni, tutors and the staff at Broomfield Hospital, I managed to qualify and get a job where I trained.

In her presidential address, Sue also said, "We must be proud to be radiographers and strive to advance the profession through research and advanced practice for the good of our patients, but never overlook their needs.

"I hope in the next year to meet many members and other people and talk to them about our profession, the great work we do and how vital we are to patients and their loved ones, emphasising patient care and professionalism.  I hope to never hear again ‘I am just the radiographer'."

Sue was preceded by Dr Roger Whitney, an interventional radiologist at Broomfield, who gave an amusing and engaging address to the audience about Sue, her passion for the profession, as well as 'the joys of radiology'.

In his remarks as outgoing president, Gareth paid tribute to Sue, the other members of the presidential team, the Society's chief executive officer, Richard Evans, and the staff at the Society and College. Gareth will now be the chair of UK Council for 2018/19.

Gill Hodges from Northern Ireland becomes president-elect and her place as vice-president is taken by Chris Kalinka who, like Gareth, is a UK Council member for Wales.