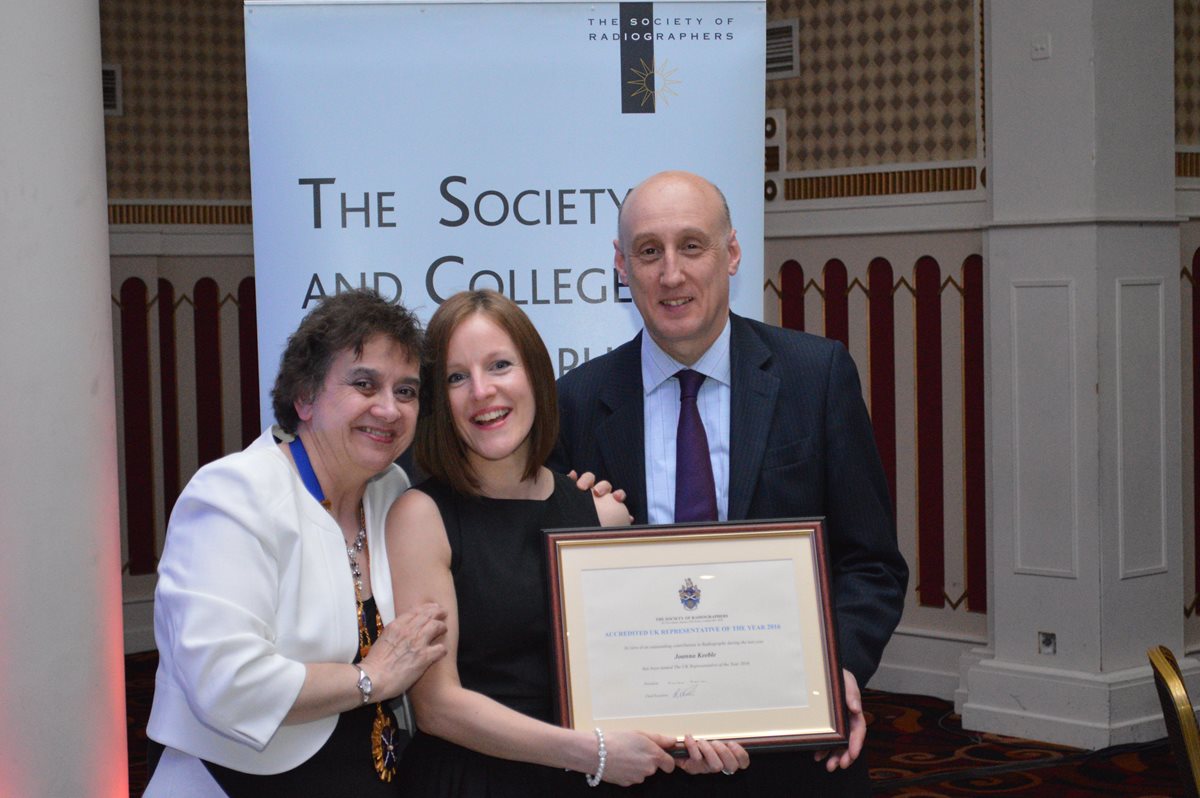 Jo Keeble is UK Rep of the Year

Jo Keeble from London has won the region’s and the 2016 UK Rep of the Year award. She collected her prizes at an awards ceremony held at the Society’s Annual Delegates Conference in Leeds last month.

Jo, who works in CT Planning in the UCLH Radiotherapy Department, was commended in a citation read by SCoR chief executive officer, Richard Evans, for giving members a legitimate voice, for always being well informed and always having a plan.

“Jo is always there to lend a hand, whether it be fighting for better pay and conditions or keeping members up-to-date on the latest from the Society,” one of the two nominations said.

“The way she has been able to establish a communication network across the trust allows her to get to the core of any issues and explain them in a way that everyone can understand.”

Another radiographer in Jo’s department commented, ”She invests time in and out of work ensuring that we are getting a fair deal, negotiating on our behalf with local management, at trust level meetings and even marching on the streets.”

In the Eastern region,Anna Harvey Lloyd from Ipswich Hospital scooped the prize. Anna is known among colleagues as a champion for all the radiographers in her department, supporting individuals on issues such as long-term sickness absence, redeployment and transformational change as the department aims to move to a 24/7 shift system.

In the Midlands, Tara Flight, Northampton General Hospital, “epitomises all the essential qualities regarded as necessary for the role of an SoR rep. She is readily approachable, always willing to listen, fair, honest and professional. Her dedication and enthusiasm have gained her plaudits, respect and trust from colleagues across the hospital.”

Angela Proctor of Queen Elizabeth Hospital, Gateshead is Rep of the Year for the Northern Region. She took on the role of SoR rep and jumped in straight in at the deep end so her department could take part in last year’s industrial action. Despite having only been in the role a few weeks, Angela organised emergency cover, made sure everyone knew their rights and kept spirits up on the picket line. (Angela was unable to attend the awards and Clare Powlesland accepted it on her behalf.)

The 2016 Rep of the Year from the North West Region is Andrew Robson from Royal Lancaster Infirmary. Andrew’s colleagues commended him for the way he goes above and beyond in his duties as a rep, often sacrificing his out of work hours and annual leave. Andrew has handled complex and at times fraught disputes over pay and conditions, securing good outcomes for colleagues, whilst maintaining positive relationships with management.

The award for ScotlandRep of the Year went to Kelsey Normand from Edinburgh Cancer Centre. She has been pivotal in keeping SoR members up to speed on the latest news from the profession, including actively campaigning for staff to vote in favour of setting up a political fund. She has represented members during stressful times, including discussions over extended working hours, an IR(ME)R investigation, resolving sick pay issues and negotiating bank holiday hours.

The South East Region winner is Delia Hazrati from Alliance Medical. Delia has tackled some of the unique challenges facing workers in the private sector with a vigour and commitment that is greatly appreciated by her colleagues. She has represented members in discussions around working hours for mobile staff, and the lack of appropriate time for breaks, securing a positive outcome which has improved the work/life balance for many colleagues.

The 2016 Rep of the Year from the South West Region is John Dowling from Poole Hospital. Radiographers praised his approachability and the way he has dealt with personal and professional issues with discretion and sensitivity. Recently, a major staff shortage has resulted in an unsustainable on-call burden for the remaining staff. John has been instrumental in raising awareness of the situation with the hospital's higher management tier and negotiating paid compensatory rest until staffing levels improve.

Tessa Payne from Royal Gwent Hospital is the Rep of the Year for Wales. Tessa’s invaluable advice and support for her colleagues as an IR rep over the years has resolved many a difficult situation. She has never asked for recognition for all her hard work, she is purely motivated to get the best for staff. None more so than when she has been called upon to stand on the picket line with colleagues, or fight for their rights over the imposition of an unfair shift pattern. (Tessa was unable to attend the awards and Jenny Steevenson accepted it on her behalf.)

The Rep of the Year from Yorkshire and North Trent is Helen Thomas from Dewsbury Hospital. Her nomination is the culmination of five years of hard work and dedication in representing members and promoting the profession. Helen has never shied away from a challenge - one of her first actions as a rep was a fraught and complicated negotiation moving three sites from on-call to a shift system. Since then she’s been involved in promoting the local region, organising CPD events and supported other colleagues.

The winners were presented with their awards by Ian Muklis of sponsors Howard Kennedy and Sheila Hassan, SoR President.