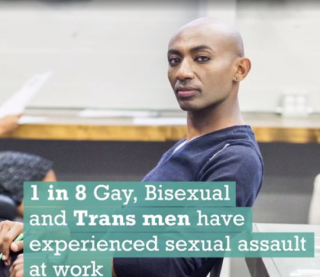 Seven out of 10 people who are lesbian, gay bisexual or transgender say that they have been sexually harassed at work. Twelve per cent of LGBT women report being seriously sexually assaulted or raped by colleagues.

The authors of the TUC’s ‘Sexual harassment of LGBT people in the workplace’ report claim that two-thirds of LGBT workers don’t report harassment to their employer.

“Many of the incidents of sexual harassment that we were told about appeared to be linked to the sexualisation of LGBT identities and the misconception that these identities solely focus on sexual activity,” the authors said.

People influenced by these stereotypes see being lesbian, gay, bisexual or trans as an invitation to make sexualised comments, or to ask inappropriate questions about an LGBT person’s sex life, particularly if an individual is ‘out’.

Respondents described a range of longer-term impacts caused by their experience of sexual harassment at work. According to the survey, one in six people (16%) reported a negative effect on their mental health and a similar proportion left their job.

Fifty-seven per cent of those who hadn’t reported an incident said that this was because they thought there would be a negative impact on their relationships at work if they did. One in four had not reported because it would have revealed their sexual orientation and/or gender identity.

Peter Higgs, the officer for Equalise, the Society's equality and diversity network, said “This report makes for difficult reading with shocking levels of unwarranted and indefensible conduct being reported. Perhaps we shouldn’t be surprised coming as it does after several other insights into harassment and abuse such as the #MeToo and #HimToo campaigns.

“It is clear that this has to stop,” Peter continued. “We must work together to end this scourge and to help change the culture we live in to one of mutual tolerance and respect. The government has already announced that it will shortly be consulting on how existing laws can be strengthened and clarified and to ensure that employers fully understand their responsibility to protect staff.”

Equalise will study the report in detail and Peter says the Society will respond to the government consultation.

He said, “If any members have any information that would inform our response, or who wish to join in with Equalise’s work, the group can be contacted via email, or please contact me directly.”