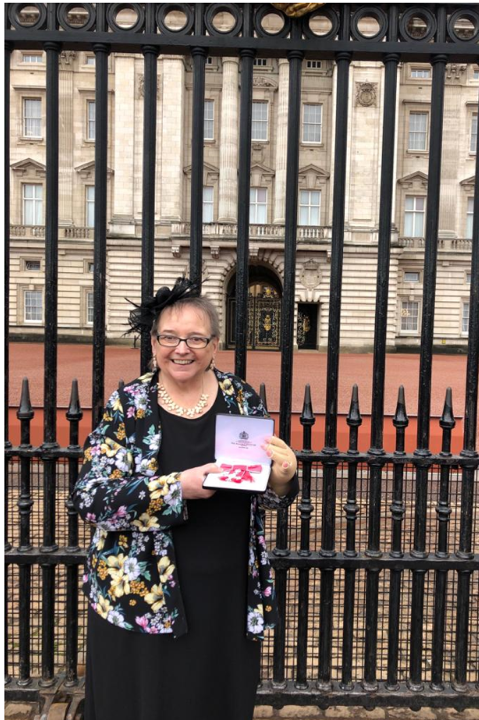 A retired therapeutic radiographer from Northern Ireland who was awarded an MBE in the Queen’s Birthday Honours List has received it at Buckingham Palace.

Margaret Grayson was honoured for services to cancer research. She was accompanied to London by her daughter, Vicky, and her sister-in-law, Bertha.

Until her retirement in 2010, Margaret worked in Belfast for 39 years. Known for being patient focussed, she developed the Belfast Department Information and Support radiographer role.

Margaret’s postgraduate qualification is in psychotherapeutic studies and she holds a Master’s degree in counselling. In 2004, she was SoR UK Radiographer of the Year for services to patients and carers.

Margaret is well known locally, nationally and internationally as a speaker, Person and Public Involvement (PPI) facilitator and member of many committees and research steering groups. Currently, she is the chair of the Northern Ireland Cancer Research Consumer Forum and is a PPI representative on the NI Cancer Trials Network (NICTN) Co-ordinating Centre executive committee.

She was diagnosed with cancer in 2004 and has been involved in partnering with researchers as a patient since her retirement. Nationally, she represents Northern Ireland on the National Cancer Research Institute Consumer Involvement Advisory Group and she is a member of the Cancer Research UK Sounding Board.