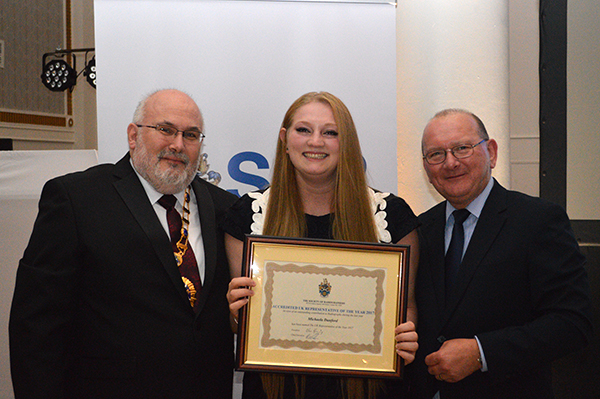 Michaela Dunford from the South East Region has won the Society of Radiographers UK Accredited Representative of the Year prize for 2017.

Richard Evans, Society chief executive officer, read a citation praising the enthusiasm and vigour with which Michaela has carried out her rep duties, despite having only recently qualified and still finding her feet in her career.

“She champions all the staff and empowers them to stand up to management if they feel they are being treated badly.

“Michaela always tries to get the best deal for all members. She is a fun, outgoing, well presented and professional radiographer,” stated the citation.

The winner of the EasternRep of the Year prize was Heather Wallerfrom Luton & Dunstable Hospital. Heather was praised for her tireless work in fighting for staff rights and always sticking up for their best interests. Her work has included difficult negotiations about a new shift system, co-ordinating a strike about pensions, and regularly coming into work for meetings on her day off.

Christine Roose from Kings College Hospital was the winner of the London award, for ‘going above and beyond for her colleagues and department’. Nominees recognised that each member of the team can turn to Christine for help and support, and acknowledged that she inspires confidence in others to speak out, because they know she will be supportive of their opinions.

In the Midlands region, Elaine Brooks from New Cross Hospital in Wolverhampton picked up the regional prize. Colleagues said in nominating Elaine that she ‘unreservedly’ deserved the nomination for being supportive, communicative, friendly, strong-willed and keeping her colleagues informed of current issues surrounding the ultrasound profession.

The award for the North West Rep of the Year went to Susan Mellor of Cumberland Infirmary. Susan was commended for her efforts in making the x-ray department at the trust a much safer place to work, so much so it’s been the subject of visits from reps of other hospitals and the HSE as an exemplary place to work.

The Northern Ireland award was shared between Natasha McEldowney and Laura Fitzsimmons of Craigavon Area Hospital. The pair were recognised for embracing their roles as health and safety reps with determination and optimism. In a highly pressurised and busy department, they’ve been able to bring about evidence-based change that is up-to-date, safe, patient-centred and efficient.

Ross Baxter-McGhee was the winner of the Scotland Rep of the Year. As well as being a health and safety rep, Ross has taken on many roles at local, regional and UK levels. A member of the Reps’ Forum, H&S rep on Scottish Council, and chair of the SoR H&S Forum, Ross also sits on Equalise, the Society’s equality and diversity network.

And last but not least, the Yorkshire and North Trent Rep of the Year is Daniel Burke from Leeds Teaching Hospitals. Danny was praised for working tirelessly to support SoR members from every area of radiology. He goes out of his way to be approachable and will always listen and provide advice and support. He is professional and calm, knowledgeable and fair.

The winners were presented their prize by Steve Herring, SoR president, and Tim Cooper, head of hospital inspections at the Care Quality Commission.

The Rep of the Year awards are kindly sponsored by Howard Kennedy.

Pictured below from left-right in descending order: