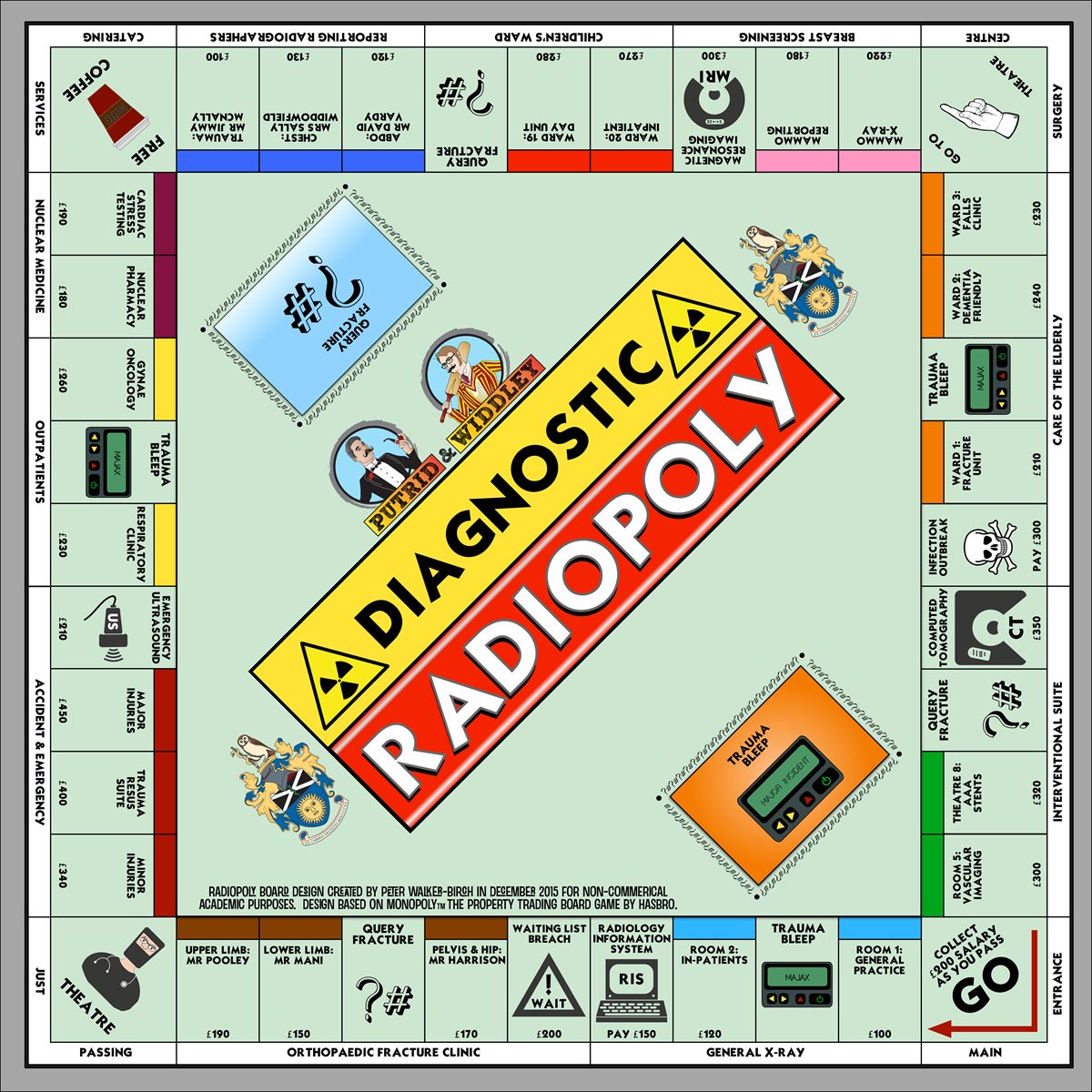 New game brings diagnostic radiography to the Monopoly board

A radiography lecturer from Teeside University is hoping to have his twist on the iconic Monopoly board game - based on diagnostic radiography - brought to life.

Peter Walker-Birch is the man behind the game, which he created as a fun new learning resource for his students.

He explains: “I was inspired to come up with a diagnostic radiography version of the Monopoly board whilst enjoying a break from watching Star Wars with my young son over the festive break.

“I was playing with some ideas for a new board game centred around a radiography department within an NHS hospital.

“The format of the board that I initially sketched out resembled a Monopoly board, so I thought I would design and develop a radiography version (called Radiopoly) as a form of relaxation for me and as a potential learning tool for our radiography students at Teesside University.”

Radiopoly resembles the classic Monopoly board known worldwide, but with a few key differences.

For example, the properties are all based on radiography rooms and departments within a typical NHS hospital. The train stations have been replaced with imaging modalities such as CT, MRI, and ultrasound, and there are a number of unique properties.

The Chance cards (normally symbolised with a question mark on a Monopoly board) have been replaced with Query Fracture (?#) cards.

And the Community Chest cards have been replaced with trauma bleep cards, a nod to how radiographers get a bleeping sound on their radiology pager.

“The idea of producing the game is to pay homage to the fantastic work of radiographers and sonographers around the globe,” says Peter.

“It also aims to highlight the pivotal role that the Society and College of Radiographers plays in representing diagnostic and therapeutic radiographers across the UK, and the positive image of our profession on the international stage.”

Alongside his friend and colleague, Mark Widdowfield, Peter has also worked on a number of similar learning resources based on popular television programmes and films, including the likes of Crystal Maze, Blockbusters, and the Krypton Factor.

These can be found via his YouTube channel here.

Since posting images of the board via his Twitter page, Peter has been inundated with messages of support.

“The response has been fantastic. I tweeted an image of the Radiopoly board on 29 December 2015 and my normally quiet phone kept buzzing away with all the likes and retweets, including from radiographers and academic colleagues here in the UK as well as Australia and Canada.

“There was even a retweet from Patrick Eastgate, the Vice President of the Australian Institute of Radiography, and Suzanne Rastrick, the Chief Allied Health Professions Officer for NHS England.”

There are now plans to take the virtual design of Radiopoly and turn it into a physical reality.

"We have had such a good response to the Radiopoly board that we are looking to explore potential funding opportunities to produce a physical version of the game, with the support and encouragement from the Medical Imaging Team here at Teesside University. It is early days, but the initial indications look promising,” says Peter.

And Peter and his team are continuing to think up new ideas, with the prospect of a therapeutic version of the board in the pipeline.

“Aside from the Radiopoly game, Mark Widdowfield and myself are collaborating on a variety of other radiography themed games to enhance the learning experiences of our current students, and to encouraging future students to consider a career in radiography,” he says.