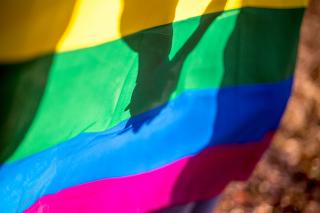 A poll by the Trades Union Congress (TUC) published on Bi Visibility Day says that:

The TUC is calling for employers to properly protect their staff from sexual harassment.

In May, the TUC published the first study into the sexual harassment of lesbian, gay, bisexual and trans (LGBT) workers in Great Britain. It revealed high levels of workplace harassment across the LGBT community, again with 7 in 10 (68%) reporting sexual harassment at work.

But more detailed figures published for the first time today show that bisexual people experience even higher levels of sexual harassment than other LGBT people in some areas. According to the poll, bisexual people were more likely to experience unwanted touching and sexual assault at work than the LGBT community in general.

However, in other areas bi women and men have similar experiences:

TUC research shows these experiences contribute to a workplace environment where more than four out of 10 bisexual people don’t feel able to be open with anyone at work about their sexual orientation.

General Secretary Frances O’Grady said: “Bisexual people should feel safe and supported at work, but instead they’re experiencing shocking levels of sexual harassment, with significant impacts on their health and well-being.

“Sexual harassment has no place in a modern workplace, or in wider society. The government needs to change the law to put the responsibility for preventing harassment on employers, not victims.”

The Society's equalities officer, Peter Higgs, said, "Society members who identify as LGBT+ must feel safe and secure at work and we urge any member who feels threatened or intimidated to talk to their SoR workplace rep or, if necessary, to their regional officer. The Society will support them."

Under current law there is no legal duty on employers to take proactive action to prevent harassment happening in their workplaces. Instead, the onus is on the victim of the sexual harassment to report it to their employer after it has happened. A TUC alliance - backed by more than 30 groups including Stonewall, the Fawcett Society and Amnesty International UK - has launched a petition calling on the government to change the law to make employers responsible for preventing sexual harassment. To date, it has been signed by more than 11,000 people.