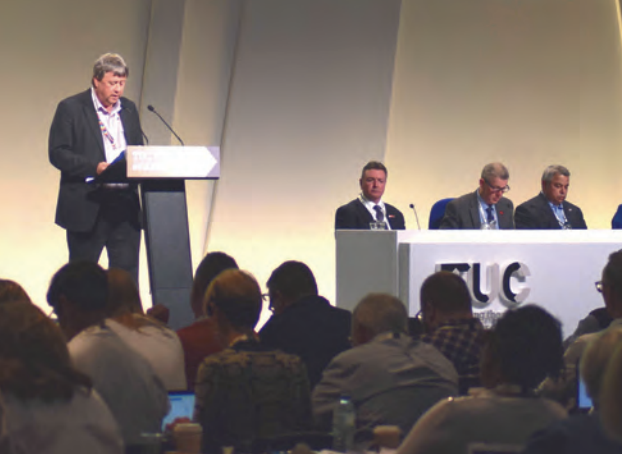 At the recent congress in Brighton (8-11 September), TUC delegates were implored to resist the introduction of 'one size fits all' pension schemes.

Paul Moloney, the Society's industrial relations manager, spoke in support of composite motion 14, making the case to protect the NHS pension and make sure that its defined benefit provision remains in place for all members now and in the future.

"While we congratulate the Fire Brigades Union on their victory in the courts, proving that in their scheme the transition arrangements were discriminatory, we do have to question why the government is so enthusiastic in claiming that this means all public service schemes are guilty of the same discrimination," Paul told TUC delegates.

"That is why the scheme specific talks called for in this composite are essential," Paul continued.

The Society is making the case for the NHS pension scheme to carry out its own assessment of potential age discrimination and for any remedy to be agreed with the Scheme Advisory Board, on which the SoR is represented.

Paul highlighted the danger of government imposed 'one size fits all', which the SoR says, could prove very expensive.

This proposal would make the NHS scheme less attractive not only to members but also to employers who are not required by law to offer the scheme to employees but could instead provide much cheaper and poorer pension arrangements in its place. Paul reminded delegates that they needed to be vigilant.

"We need to be prepared for further battles to defend our members' pensions and to defend the principle that all public service workers must have good quality defined benefit pension provision," he said.

In the NHS, that means workers, young and old, well paid and not so well paid, frontline workers or support staff all having the opportunity to have a pension based on their earnings and not on the vagaries of the market."