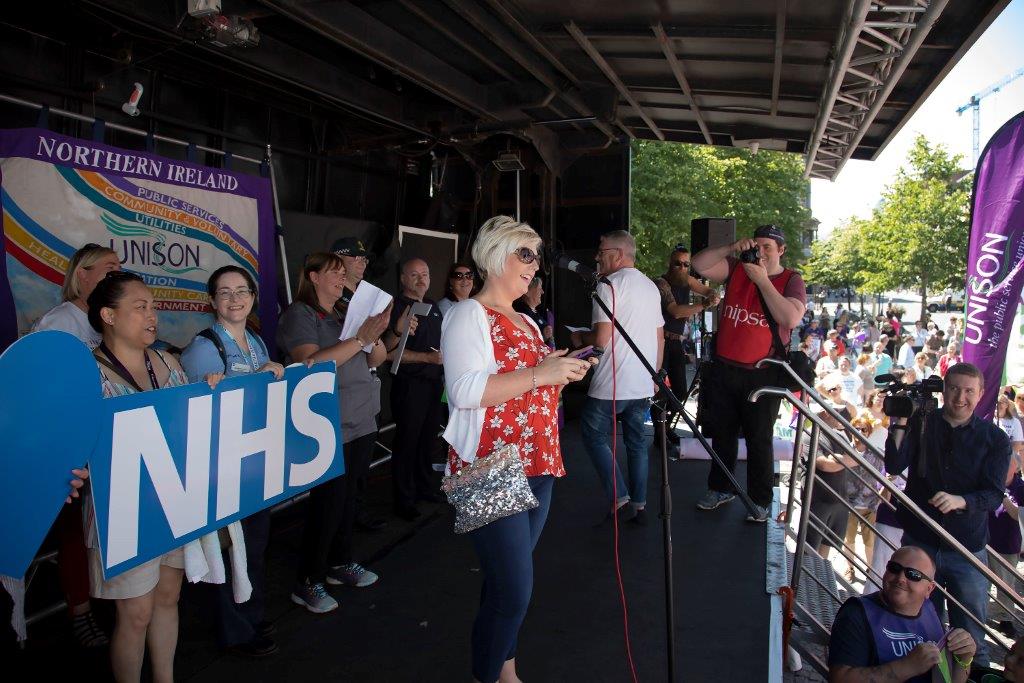 Radiographers show solidarity at NHS rallies in Belfast and London

Radiographers joined thousands of other people who marched in central London and Belfast on 30 June, to celebrate the NHS’s 70th birthday and demand more investment in public healthcare.

Addressing the rally in London, SCoR Chief Executive Richard Evans said: “There are more than 32,000 radiographers in the UK who provide diagnostic imaging x-rays and scans, and many others giving radiotherapy cancer treatments.

“Together, they serve hundreds of thousands of people every day, while other team members such as sonographers, nuclear medicine technologists, assistant practitioners and radiographer helpers all play a part in delivering these crucial parts of the whole work of the NHS.

“The Society of Radiographers members love the NHS and fight passionately for healthcare for all, and we know that radiographers always go the extra mile,” Richard continued.

“However, like workers across the whole of the NHS, SCoR members provide world-class services, too often with second class resources, and under investment in workforce and in the highly technical equipment that we need to do our jobs. And this is why we promise to campaign and fight to keep the NHS alive.”

In Belfast, radiographers joined others to take part in various parades around the city, converging at the City Hall to hear passionate and inspiring speeches from healthcare workers, union officials and the Lord Mayor of Belfast, Deirdre Hargey, who called for more funding to relieve the strain on the NHS and its dedicated and hardworking staff.

The Lord Mayor said: “Free healthcare at the point of need is a great gift and a wonderful benefit which is still being delivered for the people of this city after 70 years. As a council, we represent the thousands of dedicated women and men who deliver healthcare to all of the people. This only works because it is a universal public service which provides the same level of care and healing to the rich and the poor alike.

“Illness and misfortune should not bankrupt anyone, and the best way to ensure that our system remains more just and fair than in many other countries is to keep the NHS in the care of the people. We all own it, and we should celebrate it.”