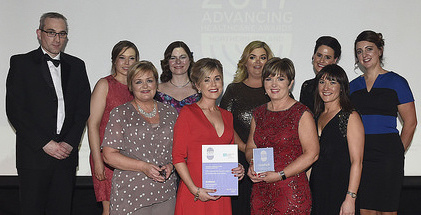 The radiography team report 74% of the trust’s core plain film trauma examinations, with the majority of reports being made within 24 hours.

The judges credited Grainne and Fionnuala for ‘great commitment and leadership as well as excellent skills and expertise’.

The judges went on to say, “ This (programme) has had a really positive impact on patients as well as empowering others.”

The rapid growth of the service has come about because of a shortage of radiologists and a lack of capacity to report plain films at a time when demand for radiology services has increased significantly.

It is estimated that over four years the trust has saved more than £200,000 by using Grainne’s and Fionnuala’s team, compared with outsourcing reporting.

Reporting radiographers had been providing radiology reports for the trust’s nurse-led minor injuries units for eight years and the decision was made to use radiographers to report all emergency department examinations.

Grainne was appointed to the lead role in October 2013, a unique post in Southern Trust and the first of its kind in Northern Ireland. Her responsibilities were to oversee and participate in plain film reporting throughout the trust with a focus on productivity improvements.

Grainne and Fionnuala say the key to the success of the service is the close working relationship between the radiographers and the radiologists, the emergency nurse practitioners, and the ED clinicians and consultants.

“We would like to dedicate the win to the memory of Dr Hall who died suddenly two years ago,” Grainne said. “

“Dr Hall and Dr Porter are the two radiologists who, through their teaching and support, have made a well governed radiographer reporting service.”

Grainne and Fionnuala received the award from Diana Taylor, head of the HSC Leadership Centre, at a celebratory dinner at Belfast’s Stormont Hotel.