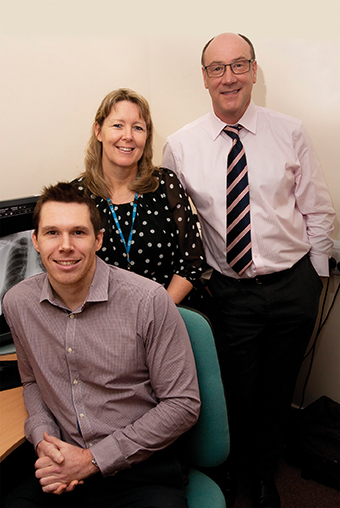 Rob said, “I’m looking forward to the challenges of working within a busy department with forward thinking colleagues who are enthusiastic and keen to do things differently.”

Rob also has plans to ensure that his team’s work is reinforced by evidence and best practice, stating, “It is easy to do things simply because that’s how they have always been done, rather than because it’s evidence-based. I want to show that we’re doing the right things based on research and evidence. I hope this approach will mean patients have even more confidence in our skills and that we’re providing the right care for them.”

As part of his role, Rob hopes to introduce ‘hot reporting’ of plain film radiographs, which will help to reduce interpretative errors and patient recall, whilst potentially reducing costs and improving quality.

Mark Buckley, Professional Lead and Service Manager, said he hopes Rob’s appointment boosts the good reputation of the radiology department and encourages other skilled clinicians to join the Trust.

He said: “We are really proud to welcome Rob to TRFT. His qualifications and expertise in reporting images will be incredibly useful. I hope his presence here will help with recruitment and retention of colleagues, which like many other Trusts across the country, has been a challenge.

“His forward thinking, creative and adventurous attitude will help us attract more talented colleagues and that in turn will have a positive impact on the reputation of the Trust.”