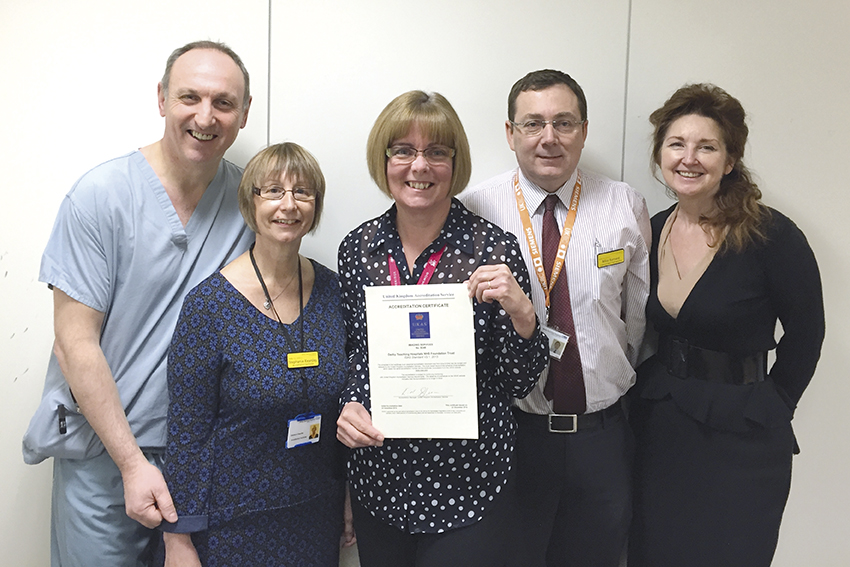 When Penny Owens first heard about the new Imaging Services Accreditation Scheme (ISAS) several years ago, she instinctively knew it made sense.

Turning to her then clinical director, Dr Simon Elliott, she said: “I think this is something we should do.”

After some discussion, Penny and Simon signed up to become ISAS technical assessors. In 2010, Penny became a fully-fledged assessor and since then she hasn’t looked back.

Quality has always been Penny’s “big thing”. After moving to Derby Teaching Hospitals NHS Foundation Trust in 2001, Penny established the ‘Mummy Test’ to help radiographers and students refine their interpersonal and care skills. The idea is to treat and care for every patient as they would their mum or significant other.

Explains Penny: “The ‘Mummy test’ was a huge success so when we introduced the idea of going for ISAS accreditation, the team immediately got it. We felt it was time to take it to the next level and we knew ISAS would help us do that. It was a way to build on what we had already achieved.”

As ISAS assessors, Penny and Dr Elliott had a clear advantage. Not only did they have in-depth knowledge of the ISAS standards, they were also able to draw on examples of best practice they had seen elsewhere.

“After we decided to go for ISAS, we started doing everything the ISAS way,” continues Penny. “We temporarily increased the size of the  established governance team with volunteers for the ISAS initiative. Two team members, including governance & risk clinical manager Mike Barnard, went off to train as assessors. It was at this point that we felt ready to go for it.”

Penny gave the service 18 months to achieve accreditation – no mean feat. “It can go on forever without an ambitious deadline because there will always be areas that are work in progress, and that’s a good thing.”

The project began in June 2014 with a big launch to staff. More team members stepped forward to join the assessors and help lead the project in their modality areas.

The team used the ISAS traffic light ready tool to benchmark the service against the standards, and Mike Barnard led a gap analysis.

“You don’t know what you don’t know,” says Penny. “The traffic light ready tool and our own gap analysis were the key to it all. After we’d done that, we all knew what the teams had to focus on and they knew what was working. I see it as a quality matrix – it’s like filling out a crossword.”

Penny recommends that other services look to ISAS accredited departments for inspiration and advice. “I think services who haven’t got assessors, or haven’t visited or spoken to others, may find the process easier if they connect with departments that have.”

According to Penny, the biggest challenge for her team was making sure it all happened. “Life gets in the way. It’s very easy to just say, ‘we’re so busy, shall we not have the meeting today?’ There was a relentless pursuit of keeping to time because we had set our goal and wanted to make sure we submitted in the summer of 2015.”

Happily, the team smashed their own target by completing by 31 March 2015 and finally submitting evidence in June. In December, the team received official confirmation they had achieved accreditation.

“I’m just so proud of it and proud of the department,” says Penny. “I have always felt proud of them but now I can feel publicly proud of the service, and feel comfortable in that pride. It’s an accolade and I feel that I’m a part of that.”

Penny, who is now looking ahead to retirement in a few years says it will likely be the high point in her career: “It’s a lifetime achievement in professional terms. It makes you realise that those 35 plus years of your hard work were really worthwhile.”