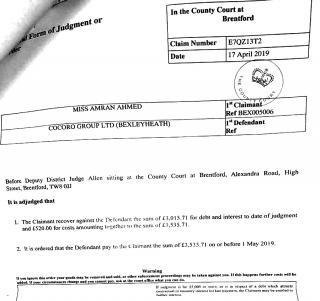 Action taken by a member against a franchisee of a company which operates 37 clinics across the UK has resulted in a county court judgement for the recovery of fees, interest and costs.

Sonographer and Society member Amran Ahmed carried out scans on mothers-to-be for the Bexleyheath, Kent franchise of Window to the Womb. Nationally, the clinics are claimed to provide more than “100,000 baby scans every year” with “99% gender confirmation accuracy.”

Amran claimed that the company which operates the Bexleyheath site, Cororo Group Ltd, had failed to reimburse her for fees and expenses for work that she had carried out for them. The court awarded her £3,535.71 for the unpaid debt, interest and costs.

When Amran realised that Cororo would not pay, she asked the Society to help. The company continued to refuse and, with SoR support, Amran filed a small claims application.

“This has been a lengthy process but I am satisfied that justice has been done,” Amran said. “I thank the Society and my regional officer, Paul Bromley, for the help and support.”

Paul said it is thanks to Amran’s determination to see the matter through which ensured that Cororo and the Bexleyheath operation of Window to the Womb could not escape paying the money owed.

At the time of writing however, payment had not been made by the court deadline and enforcement proceedings have begun.

“Based on Amran’s experience, we would advise members who are considering working for, or who are approached by the Cororo Group, to be very cautious,” Paul said.