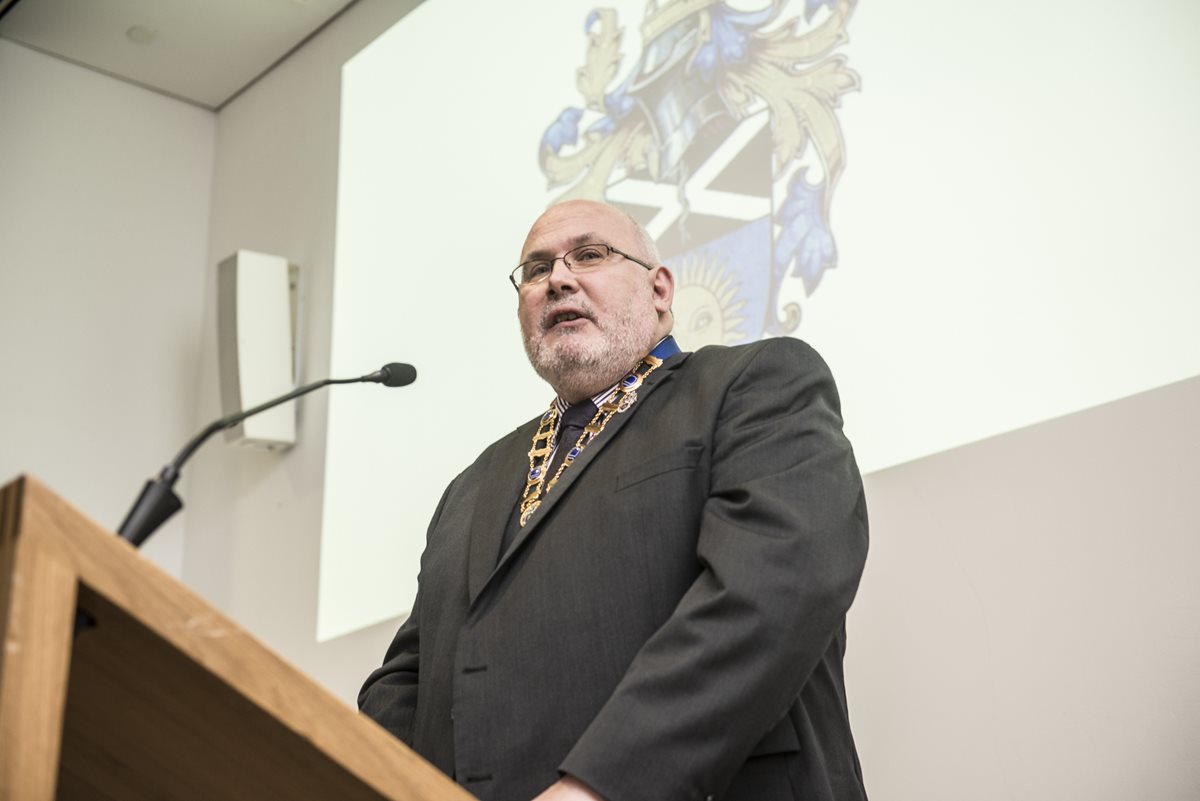 The 79th President of the Society and College of Radiographers is Steve Herring, an Advanced Practitioner, based at Maidstone Hospital, Kent.

He takes over the role from Sheila Hassan, who has served as president for the past year.

“I am no one special and may be that is the point,” Steve said at his inauguration held in London. “I’m simply here to represent everyone else and it is a huge privilege.”

A self-declared ‘late starter’ into the profession, Steve said he worked at many things before discovering radiography.

He told the audience of assembled guests, including many past presidents of the organisation and the ‘great and good’ of the profession, “A radiologist said during an interview, ‘You have a colourful CV.’

“It’s true. I’ve worked as buyer estimator for a large builder’s merchants. I put my hand down every toilet at the channel tunnel site on the day I helped to load them all on to a lorry.

“I’ve swept the streets of Folkestone, weeded graveyards and unloaded gleaming new cars from ferries at Sheerness. I’ve even driven a tank in Her Majesty’s Armed Forces.

“It has given me life skills that I use every day as a radiographer.”

Supported by his wife, Nicki, and their son, Sam, Steve paid tribute to manager Neil Bedford and colleagues Lou Gravenell and Richard Flood.

One of Steve’s former managers, Lyn McKay, now a specialist advisor at the Care Quality Commission, was the guest of honour at the event and she spoke of an “immense sense of pride for Steve, for what he has achieved by working so hard for the Society and College of Radiographers.”

Lyn said that she first got to know Steve when he was elected as an industrial relations rep in 2003. “He was involved in pay talks, disciplinary cases, proposed changes to on-call and working practices. It was during these discussions that I became aware of Steve's qualities,” she said.

“I always found him to be honest, calm, and fair-minded. He was always well prepared. He was also tenacious - dog with a bone actually comes to mind! Above all though, I was conscious of how committed he was to radiography and the importance of the role of radiographers in healthcare.”

Lyn continued: “I firmly believe it is one of Steve's missions in life to ensure everybody knows about radiographers and what they are capable of doing!"

Steve trained at Canterbury Christ Church, graduating almost 20 years ago, and now mainly works at Maidstone as a reporting radiographer. He has also been seconded as a lecturer practitioner and as a link tutor.

In his speech to the assembled guests at the inauguration, Steve echoed the words of a former president, Michael Graveling, who said in response to the question ‘What does the Society do for me?’, “You are the Society! The Society does lots for you. What are you doing for the profession? The benefits of membership are felt most by those who give most.”

Steve commented, “Members still ask the same question. As members you have a voice. You just need to use it.

“Through the Annual Delegates Conference and other forums delegates are given the opportunity to ask those of us on UK Council to work on their behalf. Sometimes what's asked is not in our gift, but many things are. We do our utmost to make sure that those are actioned.

“The member’s voice is extremely important. My aim during my presidential year is to meet as many members as possible across our regions and countries to talk to them, find out more about their hopes and concerns and to help give them that voice.”

Turning to his own professional role, he said: “My other key aim is to raise the profile of all areas of advanced and consultant practice.

“Advanced practice is so important in the patient pathway and outcomes, especially in the light of increased pressure on diagnostics and therapy.

“I’ve had the opportunity at the European Congress and at other conferences and study days to discuss the increasing relevance of advanced practice.

“Radiographers from other countries are fascinated by the opportunities that are open to practitioners in the UK. Opportunities that we need to recognise, value, promote and protect. Accreditation is one way of doing those things and I am just beginning to work towards mine.”

Steve closed his address by declaring his well known love for films and quoted from one of his favourites, The American President,during which Michael Douglas, playing the US president acknowledges that there are many challenges and serious people are needed to face those challenges.

Douglas closes his speech in the film with the words, “My name is Andrew Shepherd and I am the President.”

At the close of his inaugural presidential address, Steve said,”I am unable to resist it. I’ve wanted to finish my inaugural speech like this since I became the Society’s vice-president.

“‘My name is Steve Herring and I am the President.”