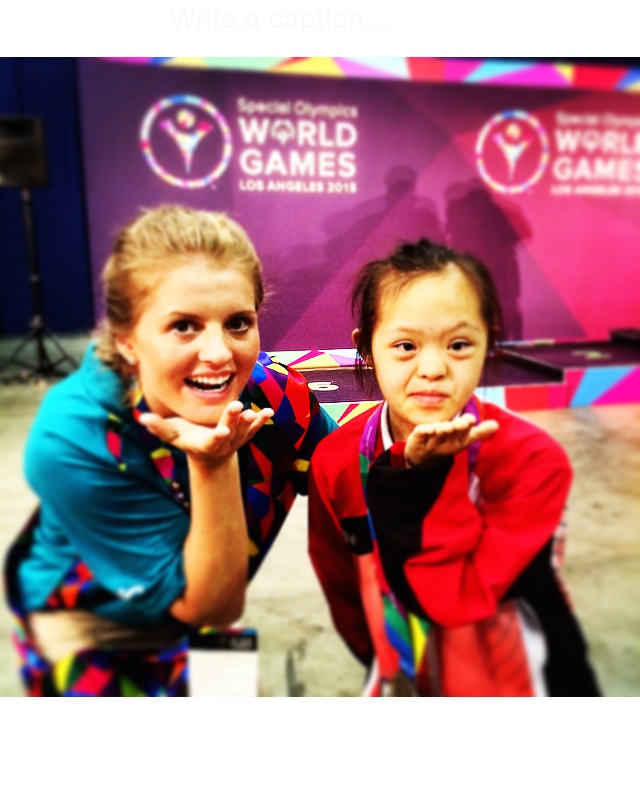 Between 25 July and 2 August 2015, over 6500 athletes representing 165 countries descended upon Los Angeles to compete at the 2015 Special Olympics World Games.

Special Olympics is a global movement that strives to enrich the lives of people with intellectual disabilities. This organisation empowers these individuals to become accepted and valued members of their communities, which leads to a more respectful and inclusive society.

Since the age of 16, I have been involved with coaching and training special needs athletes in arithmetic and rhythmic gymnastics.

The road to LA

In July 2014 I was selected to travel as a volunteer to the Special Olympic World Games LA 2015. Little did I know that I would return changed forever by my experience and with memories that will last a lifetime.

The first task I had was to help finance the athletes’ costs. I committed to raising 4750 euros, a difficult task, and one which I hoped was actually achievable!

To raise the money I organised various fundraising events throughout the year. I approached I-skate who kindly sponsored sessions on their ice skating rinks around Ireland. This was a fun event for all, supported by Irish rugby players and sponsored with tickets, smoothies and crisps.

Following this I hosted a ladies Valentines dinner. This heart themed evening was a huge success, raising over 1800 euros. Bag packing, sponsorship cards and other raffles all helped me to achieve my target.

Several meetings and training sessions leading up to our departure helped to prepare us for our trip ahead.

From day one it was apparent to me that all the volunteers approached the World Games with the same mentality. The amazing moments I experienced were made more special by the volunteers I shared them with, and as the youngest volunteer I felt very lucky to share it with some truly remarkable people.

As volunteers we started out as a group of strangers. However, by the end of our 10 days in LA, lasting friendships were formed with people from every corner of the world.

My own role was in the awards and spectator services team. This involved escorting the athletes onto the podium to receive their medals, presenting medals and most importantly cheering on, supporting and congratulating the athletes.

Watching each athlete strive to do their best, I had the privileged position of supporting them as they became heroes right in front of my eyes.

It was impossible not to notice the joy expressed in every interaction. Athletes, coaches and family alike were smiling, singing and dancing along to the official anthem “Reach up LA”. Every single person was so delighted to be at the games. It was a sort of ‘infectious happiness’.

I was touched by two particular athletes: one girl from Hong Kong who had won the silver medal in her badminton division and one boy from Russia who had won gold in powerlifting.

For me, this girl captured the slogan of the Special Olympics World Games. ‘Let me win. But if I cannot win, let me be brave in the attempt.’

Not once did she get upset when missing a shot. She simply enjoyed participating and the thrill of people supporting and cheering her on.

Watching the Russian athlete stand up to receive his medal in front of a roaring crowd, I could feel a tear drop from my eye. He was blowing kisses and dancing with excitement.  As he stood down from the podium he shared his happiness with me by giving me a huge hug and a high five. This is one of my fondest memories from the World Games.

Although the World Games are over, I still feel jubilant, as well as an immense sense of pride when I see the impact the they had. Not only did they showcase the unlimited potential of people with intellectual disabilities, but they also helped to form a new global vision of acceptance.

This experience has given me a better understanding of the value of life, the value of all members of our society and an appreciation for differences.

If other students or radiographers are interested in contributing to either the next Winter Games in Austria 2017 or World Games in 2019, please visit www.specialolympics.org