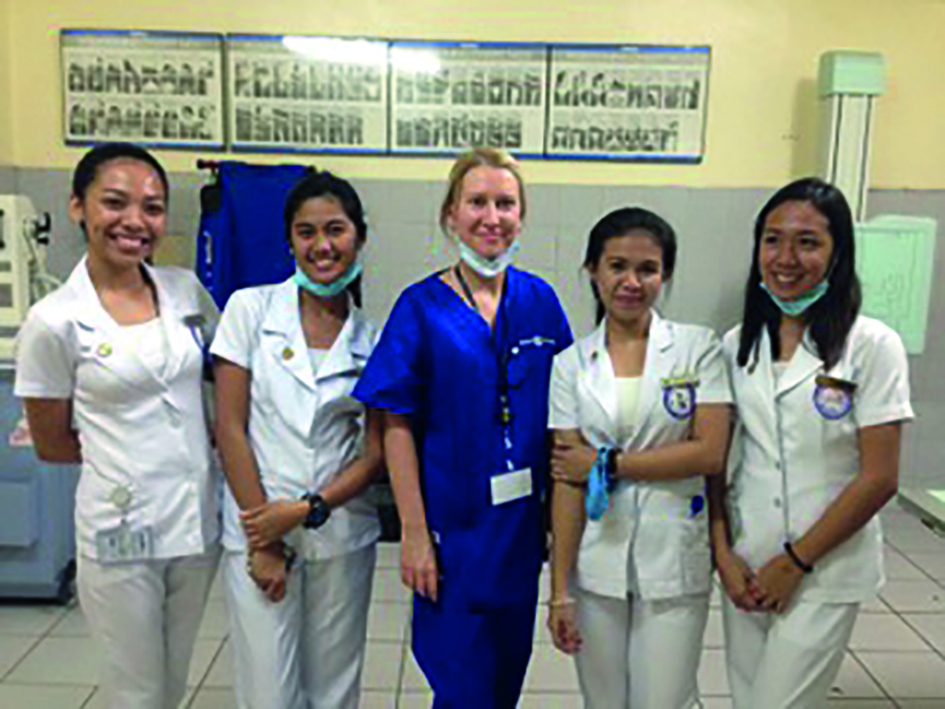 The Work the World experience

Olga Palmer, winner of the 2015/16 SCoR Work the World Competition, recounts her once in a lifetime trip to the Philippines, where she experienced first hand how radiography is practised in a developing country.

I was fortunate to win the 2015/16 SCoR Work the World Competition and headed to Iloilo in the Philippines for my 4 weeks elective placement in a radiology department.

The flight to Iloilo took less then an hour from Manila. The local WtW team and a few other students met me on the ground. I had brilliant support from both WtW and the SCoR who helped me to arrange everything.

Iloilo, ‘The Heart of the Philippines’ (In the Western Visayas), is a blend of Spanish, Malay and American traditions. The city is surrounded by beautiful natural scenery, located on the island of Panay.

The WtW villa is a large four storey house in a beautiful area near the river. It can accommodate around 30 health professional students from all over the world. All the staff and students were very welcoming and friendly; I started to feel relaxed straight away as it felt like a home from home.

On my second day we had an induction at the local government hospital, Western Visayas Medical Center (it is the the biggest in the area).

During a tour of the city, the WtW staff showed us how to use Jeepneys (the local transport) to and from the hospital and showed us the local museum and shops around the city.

We also had local language lessons (Hiligaynon language) and I learned a few useful phrases that helped me during my hospital experience.

We looked around the hospital which is very different to what we are used to in the UK. The wards looked relatively understaffed given its size and the total number of patients in each room. The patient’s relatives were helping the patients in the wards and ED.

The radiology department was based in the ED and included an X-ray, ultrasound and a CT room.

Working in a Philippines hospital is totally different to working in the UK. For the first week, I spent time in the X-ray department, which had two X-ray rooms - one fluoroscopy and one CR/DR room - both located in the ED.

The fluoroscopy room is used for special procedures like barium swallows, colonograms, cystourethrograms, and IVPs to name but a few.

The X-ray department provides 24/7 services to local people, mostly from low-income backgrounds. The majority of diagnostic services like X-ray and CT scans aren’t free, but still cost half of the price you would pay in a local private hospital.

I was also shown how to use an automatic processor in the dark room, which is now officially a piece of X-ray history. The automatic processor was used to reduce film processing time compared to manual development. It’s amazing to know that it was still used as recently as a year ago. It really shows the difference in the speed of progress when compared to the developed world.

New technologies were introduced to the hospital last year. Now, both rooms are equipped with CR/DR Shimadzu Carestream machines.

The condition and functionality of the machines in the hospital varies. There’s one operational CT machine in the department, yet the MRI machine has been broken for a while due to the problems with its power supply.

The radiotherapy Cobalt suite hasn’t worked for over two years and local people have to travel as far as Manila to get radiotherapy treatment.

It was a real learning experience to see how amazing the local professionals are at performing their jobs with the limited resources they have.

There is, however, good news on the horizon. A mammography machine is just being brought in from China and will be installed within the next few months.

During my week in the X-ray department, I noticed significant differences to the way things were done at home, including in the way justifications and protocols were done, manual handling, patient privacy, infection control, and radiation protection.

What’s more, families were bringing patients into the room and assisting in patient positioning, manual handling - and on some occasions holding the patient during the exposure.

Not many of the patients spoke English, which made communication challenging. Learning basic Hiligaynon helped, but understanding patients’ detailed responses to my questions was difficult.

However, all the staff were really supportive, and spoke to me in excellent English when translating on behalf of the patients.

Radiographers here don’t have much communication with the patient during the positioning, and very few instructions are given to the patient before the exposure.

Trauma patients were positioned and moved by the rad techs. The reporting radiologists were based in the department next door and worked long hours - sometimes 24-hour shifts and up to 60 hours per week.

The radiologist on duty handled reports for CT and X-ray, special procedures (interventional radiology) and ultrasound, plus answered patient questions and other staff queries during the reporting sessions.

At first, the way things were done surprised me, but I soon came to realise that all staff are totally aware of safer procedures, just lack the resources necessary to carry them out.

In my first week I saw a lot of trauma patients (the majority due to a RTA) and many patients with pulmonary tuberculosis (TB). The majority of the patients had conditions not normally seen in the UK. Also, due to the cost of healthcare, patients often can’t afford to come to the hospital in the first instance, and often see it as a last resort.

It was an emotional experience and I felt grateful to all the staff who worked so  hard with such limited resources to provide the best care they can for the patients.

I was allocated to work in the ultrasound department on my second week. Again, I was fascinated by the generosity of the Filipino people. I watched as patients shared meals and medication they brought to the hospital despite having very little themselves.

I noticed that the patients had to bring their own drugs and supplies with them for their different procedures. I thought how privileged we are to be able to use NHS services.

The infection control was different to what I used to back home, as linen was not changed regularly, nor there any sterile wipes available. There was sterile gel and toilet paper available and were used to wipe the ultrasound probes, kits and table.

I saw that a family would bring the patient into the room and stay with the patient on some occasions. The ultrasound room felt crowded with people and as a result there was very little consideration of patient dignity.

On the third day there was no ultrasound. Patients who turned up were told to go home, as there was only one doctor on duty (the only patients were eligible to ultrasound are emergency ones).

I went to back to X-ray. The shortage of radiologists was also evident in the busy wards. Five patients sometimes would share one bed in the ward and one nurse would look after 20-30 patients.

There was only one ultrasound room and on average there were about 20 patients per day. The doctor on duty performed the scans and gave written details to the secretary (typist to type in). All the images were printed and kept in a notebook for the doctor to check the initial report and write a final one.

The doctors and residents were working very long hours, including overtime for which they weren’t paid.

It is impossible for a rad tech to do extra training in the Philippines and go into advanced practice to specialise in an individual modality.

I did not notice any career progression framework in place. Instead, the rad tech students volunteer in the hospital for years to get a job (even after qualifying and getting a licence to practise), as the job market is very tough.

On my third week I spend 3 days in CT and the rest of the week in X-ray. There were only 2 CT scanners (16 slices), and the 3rd one was out of order for over 2 years.

There was no patient manual handling technique in place compared to what I am used to back home. The contrast pump wasn’t used instead the contrast (Iopamidol) was injected manually by a doctor when the patient was already on the scanner. Sometimes the doctor was busy and contrast was injected by rad tech.

There were also tumour biopsies performed by a doctor right on a CT scanner which I had never experienced back home before.

All the staff were very experienced performing their duties, including a lot of paper admin work. I have a lot of admiration for staff working under such conditions and being committed to their jobs. I felt lucky that I’ve trained in such an advanced health care system.

It wasn’t all work and at the weekends we went to islands such as Guimaras Island and Antique.

The natural environment is beautiful and you can see waterfalls, hot springs and beautiful sandy beaches. It was fantastic to feel part of the team at work and in our leisure time we shared various Filipino foods (as food in the Philippines is a big part of the culture).

I made friends from all over the world at the WtW house and had an experience I will never forget. The work could be very challenging, but I’ve learned a lot in a short period.

On reflection, my elective experience has had a positive impact on me and improved my skills further as a health professional.

At first, working in a different environment and under different protocols, facilities and conditions, and with such limited resources, seemed like an impossible task. But after just a few weeks, I fully immersed myself in the new environment and embraced a new culture.

This opportunity has changed the way I work (and the way I will treat my future patients, for the better, as a result) and it gave me a different perspective on the constant challenges health care systems face in a developing country.

It was an eye-opening experience like no other and helped me to improve my confidence in dealing with a range of difficult situations and made me think “outside the box”.

It has also given me a fresh perspective from which to admire and value our current evidence-based practice in the UK.

Looking back, it was the best experience I’ve ever had.

I got the opportunity to meet other students and health professional from all over the world, from many different backgrounds and I have made deep and lasting friendships.

I would like to thank the Society of Radiographers for this life changing experience; without you I would never have experienced this wonderful month.

And I am also very grateful to all the WTW staff in the UK and the Philippines which were amazing and so supportive.

The experience I had exceeded my expectations by far!