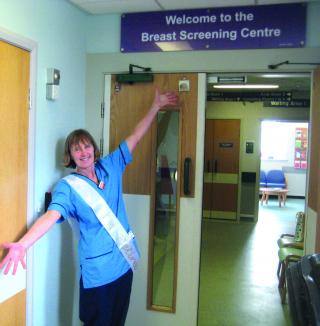 “This is for everybody in the profession. I am just a normal person.”

Awarded the British Empire Medal in the New Year’s Honours, Rosey Leiper said, “I feel so humble and it was an enormous surprise.”

A radiographer for 40 years and one of the first mammographers when the NHS Breast Screening Programme was established in the late 1980s, Rosey has spent most of her career in Aberdeen.

She trained in 1978 at the Royal Free Hospital, London and her first jobs doing general radiography were at the Whittington Hospital and the Royal Hallamshire, Sheffield.

“I then moved to Scotland and was a ‘basic grade’ radiographer in the main x-ray department at Aberdeen Royal Infirmary,” Rosey said.

When the Forrest Committee concluded that a dedicated service was needed because ‘screening by mammography can lead to prolongation of life for women aged 50 and over’, Rosey took the opportunity to become one of a team of four mammographers in Aberdeen who set it up.

Retiring from full time work in March last year, Rosey is now a bank mammographer working one day a week. “I actually was glad not to fully retire because I would miss my colleagues and the team,” she said.

Rosey’s BEM honour is not just for her long service to radiography but also for years of fundraising locally for The Macular Society. Two members of her family have suffered from macular degeneration. Rosey ran her second London Marathon in 2010 and raised money for the Society and she has been doing so through numerous events ever since.

She said, “This award is in celebration of my family and friends, as well as past, present and future generations of radiographers and mammographers. It’s a wonderful way to end my career and I want to share it with everybody.

“I am so proud to have been a radiographer. I have seen many changes in the profession over the past 40 years and then we never dreamed that developments such as advanced practice would ever happen. This is for everybody in the profession. I am just a normal person.”

Rosey continued, “I really appreciate that the honours system acknowledges the support that ordinary fundraisers provide. They do amazing things for lots of good causes.”