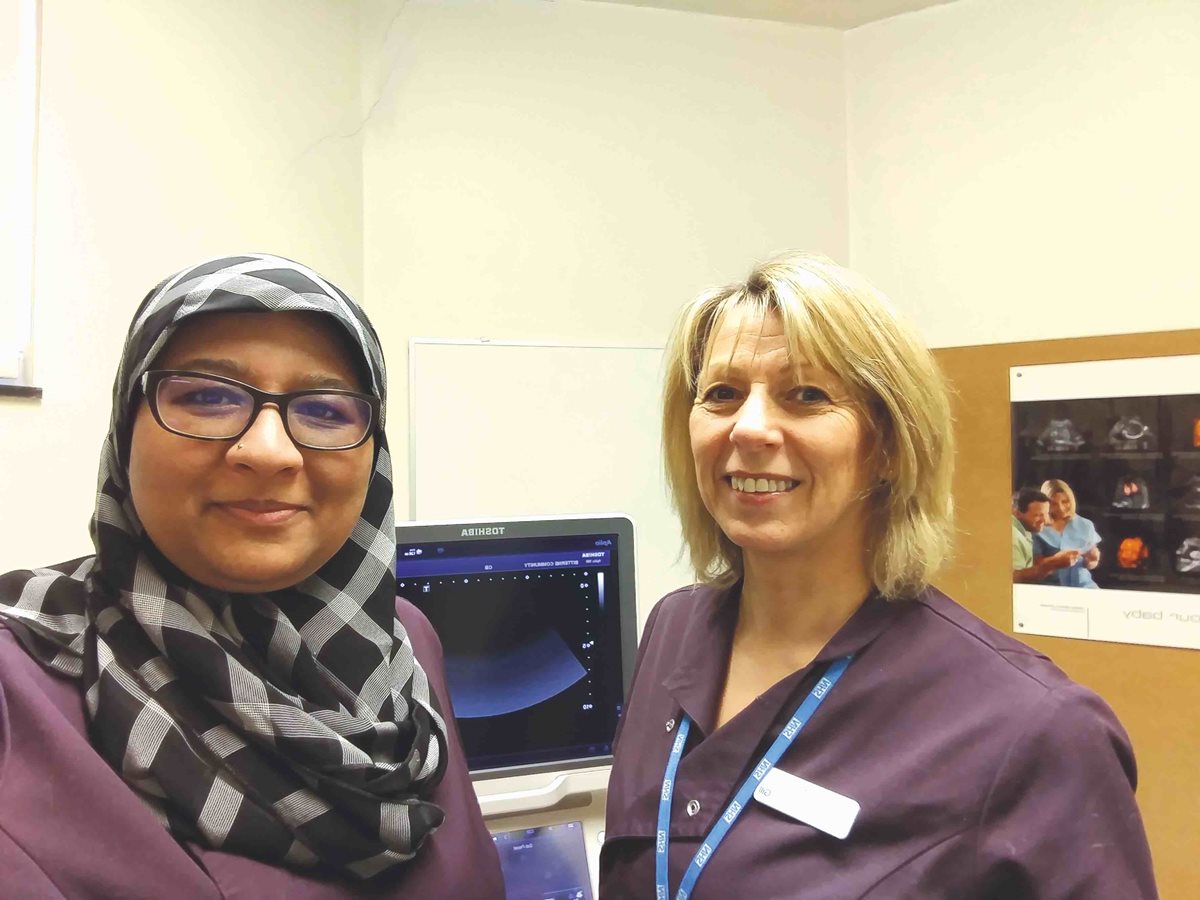 Famida was seconded to Health Education Wessex to lead a sonography training programme, to increase sonographer numbers in Portsmouth and Hampshire Hospitals - Salisbury, Poole, Bournemouth and the Isle of Wight, as well as Southampton and Dorchester.

The aim of the project was to increase capacity for O&G trainee sonographers, improve the quality of training, and standardise training and shared guidelines.

The concept of regional trainers was the brainchild of David Howe, Princess Anne Hospital and Sue Hill, workforce transformation lead at Health Education England Wessex, together with the local ultrasound leads across the region.

HEW agreed to fund Famida and another trainer role, and Princess Anne Hospital, part of University Hospital Southampton NHS Foundation Trust (UHS), agreed to fund a third trainer post. The original funding was to March 2018, however, this has now been extended to March next year.

Famida and Gill Newcombe, specialist sonographer in education and training, travel to the separate sites to train midwives, doctors and trainee sonographers in O&G ultrasound, as well as supporting local sonographers.

"For a consistent and standardised training programme, we developed the regional ultrasound competency framework, based on City, University of London’s framework, with the agreement of Gill Harrison, senior lecturer in ultrasound and programme director for medical ultrasound," Famida says.

“The trusts wanted consistency and efficiency across the board, giving the trainees a good experience, which some of them hadn’t had due to excessively busy lists. They also wanted a shared protocol across the region, so that patients would receive the same service whatever hospital they visited - from one trust to another,” Famida continues.

“There is a lot of benefit to having shared practice - for both practitioner and patient.”

In the first year, training has been concentrated around obstetrics and gynaecology. However, extra funding for a fourth trainer would extend training possibilities, such as including abdominal and other scanning specialties.

“Initially, we met with local ultrasound leads and asked key questions: what the priorities were, who they wanted us to focus on and, importantly, what resources they were able to offer, for example ultrasound rooms,” comments Famida.

Poole Hospital and Portsmouth were very responsive to the project and keen to receive training support. Portsmouth trust was training a midwife in the third trimester in fetal growth scan, without a dedicated training package in place and the training had become static; the main barrier for the trusts was the overwhelming capacity, ie very busy lists.

“Through the training programme, we have also absorbed some of their capacity and helped alleviate the pressure on departments,” Famida says.

The roles also co-ordinated with the Saving Babies Lives Care Bundle, an ambitious campaign to reduce stillbirth rates by 50% by 2030. This highlights four elements of care during pregnancy, one of which is risk assessment and surveillance for fetal growth restriction.

Most trusts in the region have adopted the Personalised Growth Charts, created by the Perinatal Institute in Birmingham. This has resulted in an increase in the demand for third trimester growth scans.

“Poole Hospital Foundation Trust saw a 104% increase in workload as a direct result of the initiative”, Famida claims.

The obstetric ultrasound lead at Poole Hospital thought that she could utilise the trainers best by training four midwives from the maternity day assessment unit (MDAU). The result is that Poole now has three midwives qualified to provide a sonography service in third trimester fetal growth within the MDAU, with another two to commence training shortly.

“We had a slow start and now it has become very hectic; our role is making a real difference to individual trusts," Famida says.

“Our long term vision is to develop a school of O&G ultrasound with a centralised training centre, however this will require significant funding. Our initial premise to enable the regional trainers to succeed in this project, was to support the development of a one-stop maternity assessment service.”

Famida is writing a business case to make the roles permanent.