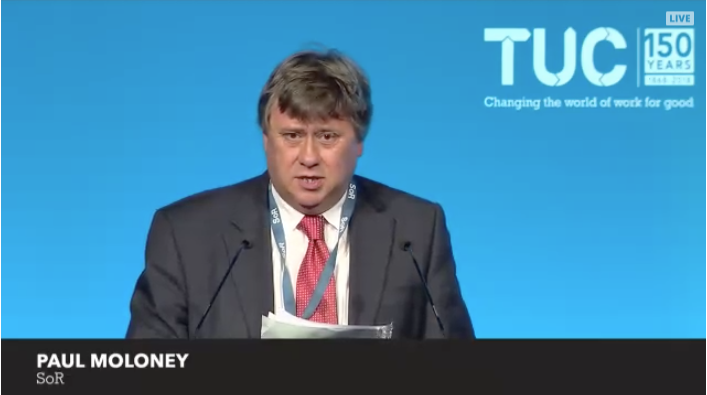 An emergency motion at this year's TUC Conference (9-12 September, Manchester) proposed by the SoR, which condemns proposals by HM Treasury to load more costs on public sector pensions, was unaminously passed by Congress.

Speaking to the motion, Paul Moloney, the Society's industrial relations manager, wrly noted that 150 years ago when the TUC first started, trades unionists did not anticipate that delegates today would be debating the "sexy issue of actuarial discount rates."

Accounting changes forced on the public sector pension scheme by the Treasury means that employers will either take money from already stretched services, or reduce pension benefits.

Quoting the Financial Times, which has estimated that the Treasury's proposal will cost £4billion, Paul said that following the NHS pay deal the government is "giving with one hand and taking away with the other."

“Our concern is that this change is a unilateral, technical decision made by government that will significantly increase pension costs for employers at a time when public services continue to suffer from the effects of years of austerity,” Paul Moloney said.

“Unless the government fully funds the increase in contributions, employers may be tempted to introduce cheaper pension provision, or further cut public services that have already been damaged and destroyed by repeated budget cuts,” he continued.

Congress notes that the directions issued by the Treasury effectively dictate the assumptions made by actuaries when valuing public service pension schemes. This includes the assumptions about the discount rate, any changes to which can have a significant impact on the cost of pensions.

Congress further notes the reduction in discount rate required by the directions will increase the cost of many public service schemes including those covering NHS workers, firefighters, civil servants and teachers.

Congress is concerned that this change is a unilateral, technical decision made by government that will significantly increase pension costs for employers at a time when public services continue to suffer from the effects of years of austerity.

Congress calls on the General Council to demand that the increased costs caused by this accounting manoeuvre are fully funded by central government and do not result in cuts to services or attacks on public service pension schemes.