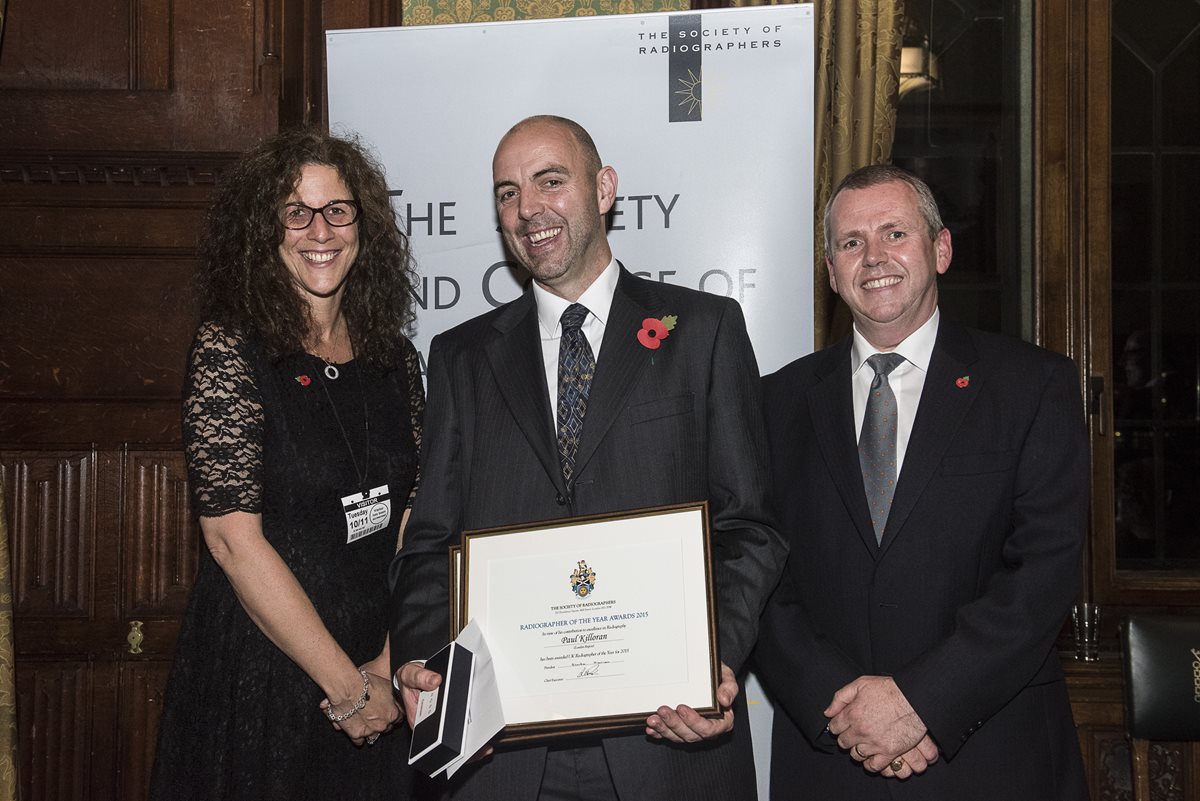 UK Radiographer, Students and Team of the Year honoured at awards ceremony

The UK Radiographer, Radiography Team and Students of the Year were in attendance at a ceremony to celebrate their success at the House of Commons last week.

Paul Killoran, a diagnostic radiographer from North Middlesex University Hospital, picked up the Radiographer of the Year prize after being nominated by colleagues for his dedication over a distinguished 28 year career.

The nomination came as a surprise to Paul, who only recently found out he had won the award. “I found out a few weeks ago. I got an email saying I had won the London award, then you are put forward for the national award, which I found out I had also won. I’m now hoping to go for the European and World awards too!” he joked.

The UK Team of the Year prize went to the Hysterosalpingogram team from the Craigavon Area Hospital in Northern Ireland. Audrey Mitchell, Janet Eagle and Helena Kinkaid were in attendance to pick up the award, which recognised the team’s outstanding skill and dedication.

“It is overwhelming and it’s surreal, we can’t believe it,” said Helena.

“Everybody in the department knows about the award and they are over the moon.”

“Coming from Northern Ireland and as radiographers we put ourselves down and say it’s just part of our job, so to be recognised for something like this is brilliant.”

In her introductory remarks, Sheila Hassan, president of the Society of Radiographers, emphasised the importance of the awards in recognising the outstanding work done by radiographers around the country.

“These awards are about people and and their achievements. What makes them special is that the nominations are made by radiographers for radiographers.

“We can be proud of our profession, that despite challenging times within our health service year on year, we continue to hear stories of inspiration,” she said.

Sheila introduced the winners of the regional awards, who were presented with their certificates by guest of honour Samantha Jones, director of the New Care Models Programme at NHS England.

Samantha praised the fantastic work done by all of the winners. She said: “This is a moment to celebrate some amazing individuals who are day in, day out doing fantastic things.

“I’ve heard comments about people being patient focused, supporting their team members, being creative and designing the future, so what else would I want to do than come and celebrate those individuals and recognise what they do.”

Rounding off the evening, the awards for the top diagnostic and therapeutic student radiographers were handed out.

The therapeutic winner was Curtis Parker-Milnes from Sheffield Hallam University. Picking up the award was the beginning of a busy week for Curtis, as he is also due to officially graduate soon.

“I knew my university had nominated me for the award, then through the post I got the letter saying I had won it, so my family was very excited and I was very excited as well. It’s all been building up to today,” he said.

“When I had found out I had been nominated by the university that was nice, but when I got the letter saying I had won I was blown away.”

The winner of the diagnostic award was Ruth Avery from UWE in Bristol. Ruth described the happy moment she found out she had won the award. “I got a letter in the post in September. We’d just been away for the weekend, my husband opened the letter and read it out and I thought he was making it up!

“I just couldn’t believe it to be honest, it’s really nice to be put forward, I felt quite proud of that, but then I put it at the back of my mind because I didn’t think I was going to win.”

The full list of winners are below. The pictures at the bottom of this page correspond with the list, running from left to right (i.e. top left is Paul Killoran, top right is Tracey Clegg)

London and UK Radiographer of the Year - Paul Killoran