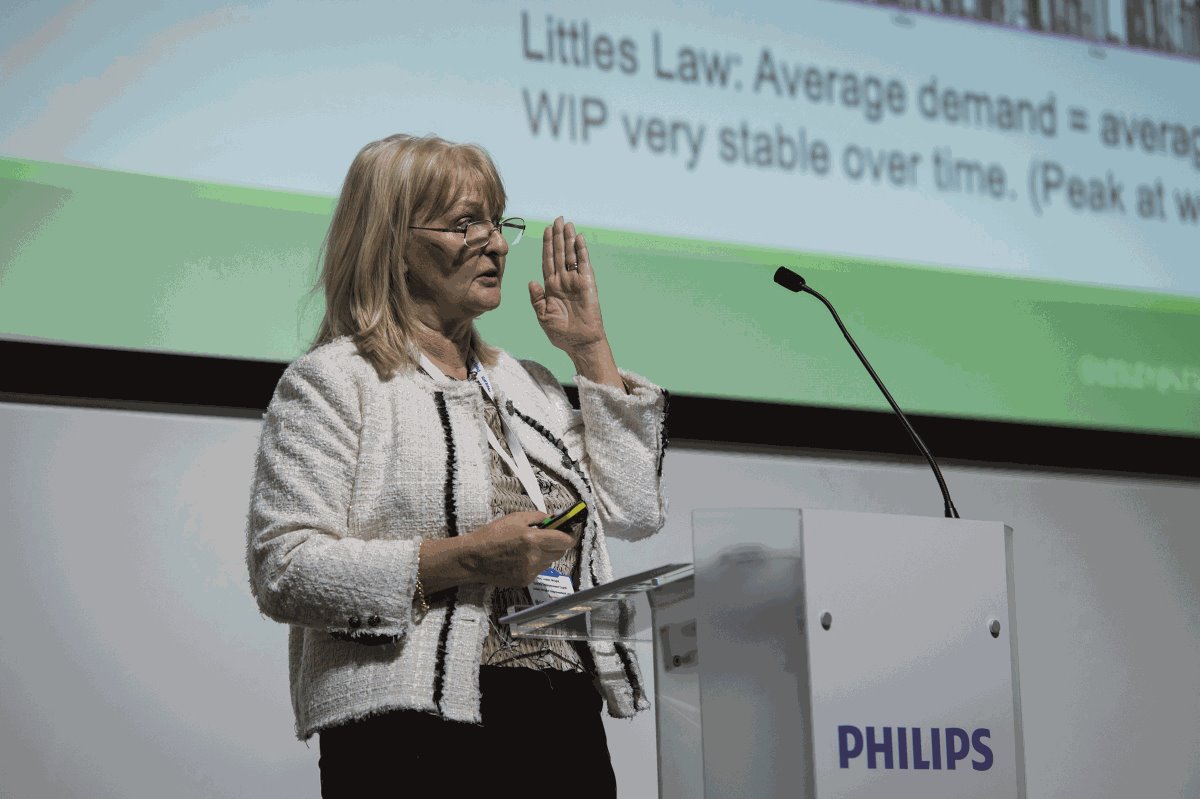 We can do today’s work today

“We’ll hear a lot of talks today about radiographers improving their skills to diagnose patients, but do we invest enough time in diagnosing what’s wrong in our radiology department?”

Lesley Wright, a quality improvement coach, raised this question during her presentation around understanding capacity and demand in radiology.

Lesley explained how by using a scientific methodology, she has been working with trusts to help them understand what were the major pain points in their radiology departments.

The approach involves creating a ‘Flow Vitals’ chart, which pinpoints the demand (requests), activity (requests completed), waiting lists (requests still not completed) and lead times (time from request to result) in a department.

Plotting this information allows departments to understand whether their challenges are caused by capacity issues, or by policy issues (ie conforming to national guidelines), said Lesley.

Sheila Glenn, Divisional Operations Director at Norfolk and Norwich, gave a case study of how the trust had used this approach, with some surprising results.

“We were constantly being told we didn’t have enough capacity, and after that we went into financial special measures. It meant if we didn’t find more capacity and needed more of anything, we weren’t going to get it,” explained Sheila.

“Following a workshop I attended, the penny dropped; I thought that as a clinician, I would always assess and look at the diagnosis then find the treatment, but that’s not what we were doing. We jumped straight to a conclusion.”

After working with Lesley, the trust discovered that one of its biggest issues was cancelled requests, wasting a huge amount of time and effort.

Investigations revealed that the majority of these requests were cancelled due to inconvenient timing for patients, which provided an opportunity to change.

Further drilling down of the data showed that despite staff feeling burnt out and working to their maximum, times when patients were being scanned (touch times) v the machines running (open times) were not syncing together, to the extent the department was running at 62% capacity across five CT scanners.

“What this shows is that we have capacity to do today’s work today. Sometimes it’s not a flow constraint, it’s a policy constraint,” concluded Lesley.