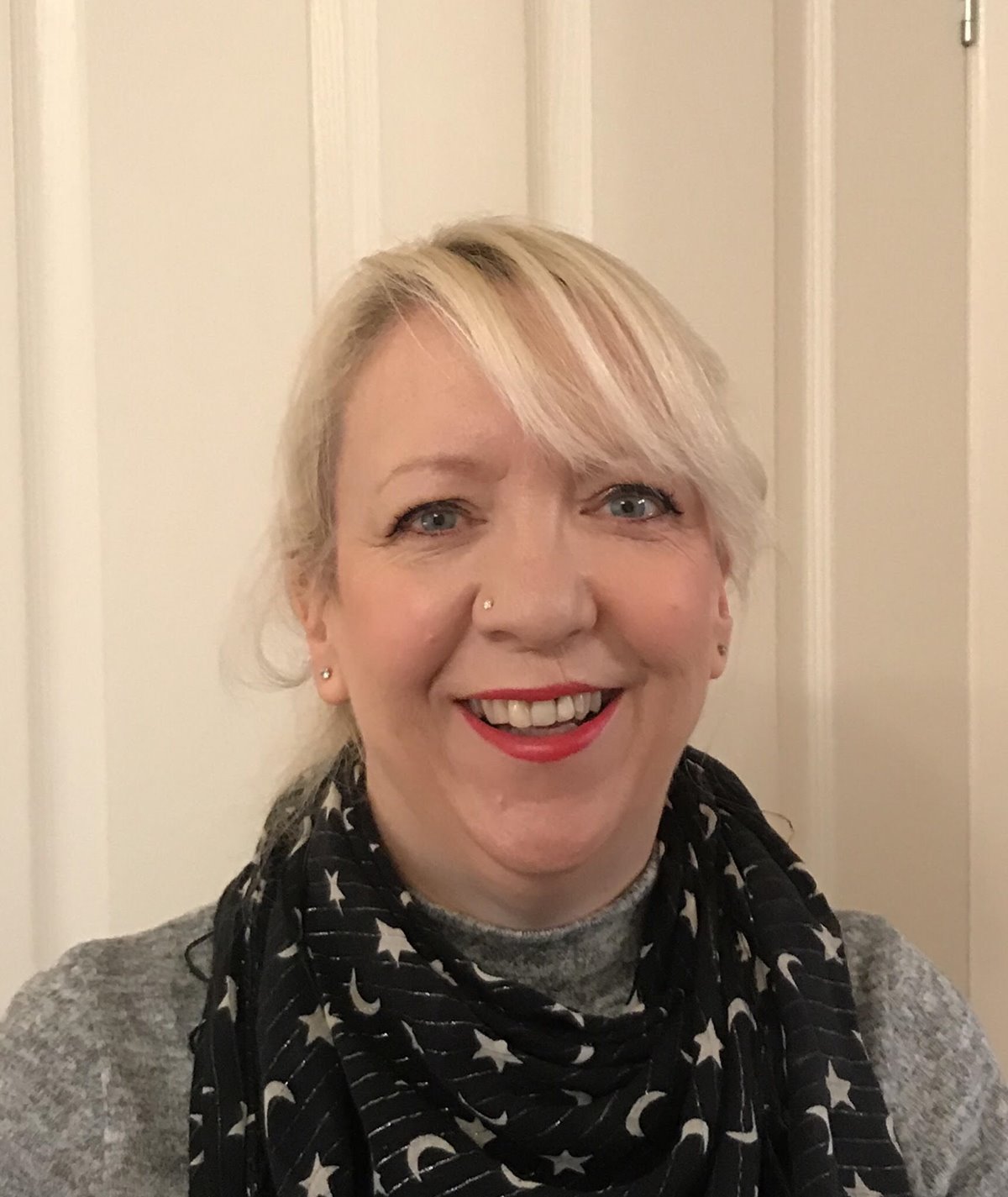 Behind the mask - growing up with a cleft lip and alveolus

Radiographer Claire Norman shares her life experience and why she is &#39;quite enjoying&#39; wearing a face mask

Since the Covid -19 pandemic, I, like others, have been wearing a mask at work and also in shops and other areas. Social media has been awash with people saying they cannot breathe in masks or they hate wearing them because they are so uncomfortable. In October 2020, I wrote a tweet which started by saying: ‘I am quite enjoying wearing a mask.’

My tweet was acknowledging that for me – a person with a cleft lip and alveolus – wearing a mask made me appear exactly the same as everyone else. I must, at this point, acknowledge that a cleft lip is only a tiny defect on one small area of the body. However, what I believe makes it different to other much more serious conditions is that it is right in the middle of the face.

There is no getting away from it, no hiding it. When you meet a stranger, they look at your face, they speak to your face, they listen to your voice which emerges from your face and they watch the expressions on your face.

Cleft lip and palate (CLP) are one of the most common birth defects, occurring in around 1 in 700 babies in the UK. A cleft lip can be on one side or bilateral and can be a small notch in the lip or a wide gap from the lip going up the nostril. A cleft palate can be a small opening in the palate or a cleft that runs all the way from the back to the front of the mouth. A cleft alveolus is a cleft in the bone superior to the teeth and may include a fistula linking to the nose.

Spartans and Romans killed children with CLP as they believed them to harbour evil spirits4. 0ther cultures were more pragmatic, and the word ‘scar’ actually comes from a Viking invader named Thorgils who had a cleft lip. His nickname was ‘Skarthi’ meaning ‘the hare lipped’ and he founded the town of Scarborough in 966, which was named after him5.

Most CLPs appear out of the blue although there is an increased prevalence if it runs in the family. Around 40 % of cases are believed to be due to family history. Around 15% of CLPs are also caused by a condition or syndrome. There are over 400 syndromes which may cause CLP but some of these are very rare. People with clefts are evident in all societies, and worldwide rates vary greatly based on geography and ethnicity.  Babies of African origin are less likely to be born with a CLP, where the incidence is around 1 in 1,200.  The female to male ratio of occurrence is 1:2 and it is more common in the Caucasian population. 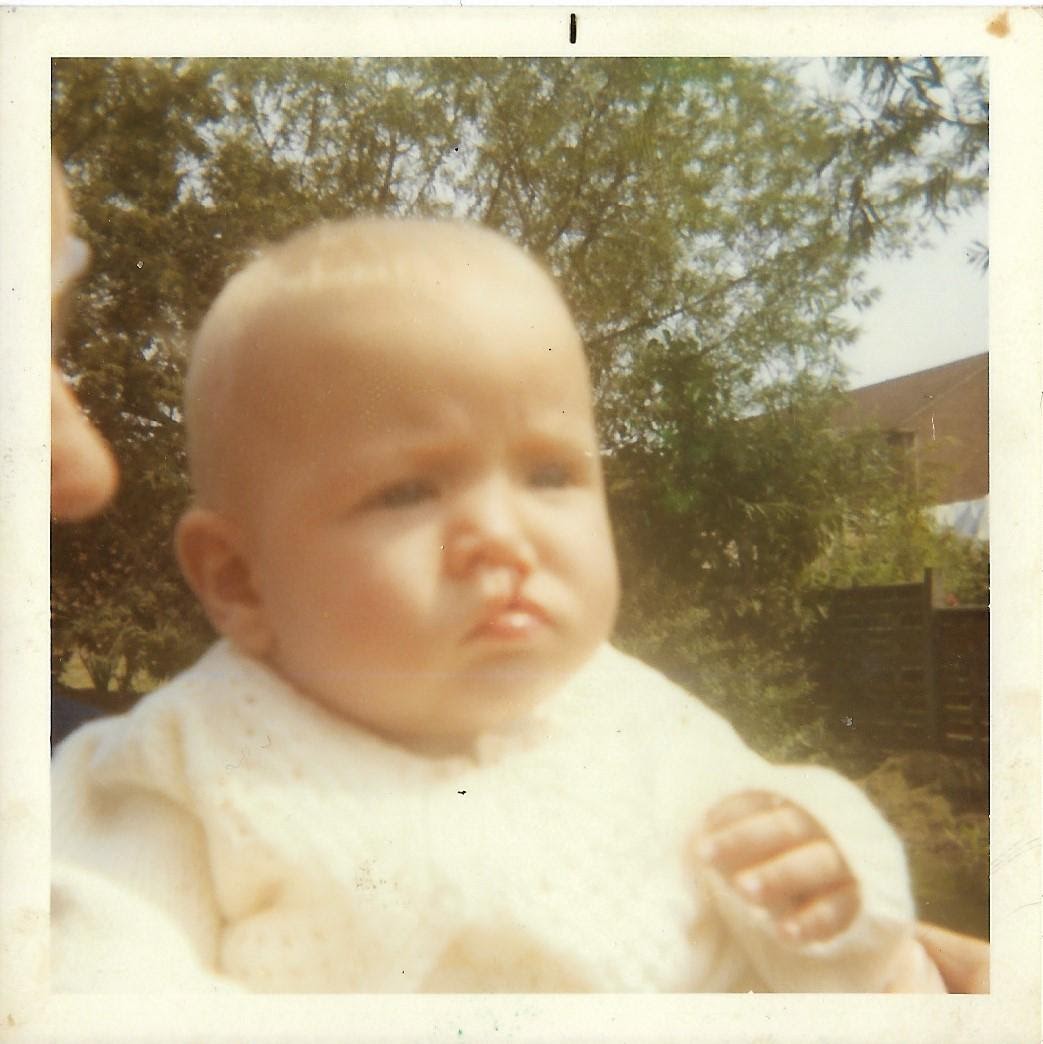 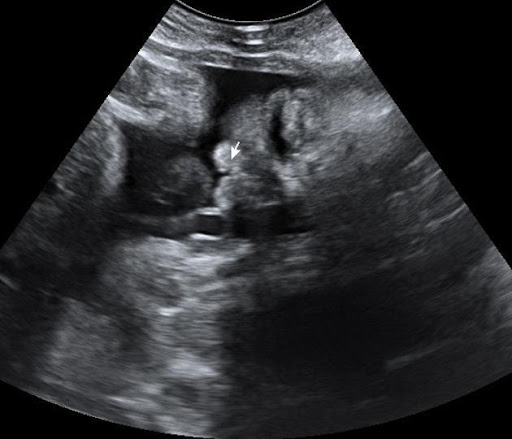 Photos left to right: A cleft lip seen on ultrasound and Claire as a baby.

The surgery to close the cleft in my lip, which also went up my nose, was carried out when I was 10 months old. I was sitting up in my pram and waving at people by then and my mum recently told me she had hated people saying what a terrible shame it was that I had that affliction.

I can’t remember ever being told that I looked a bit different but I always knew I was.  When I started school, I remember the girl who sat next to me asking if I knew I had one nostril bigger than the other.  She wasn’t being nasty, just inquisitive, and I told her ‘yes’, I did know. It was only when I went up to secondary school that things became more difficult, particularly as I had a missing front tooth due to the cleft in my gum which gave me a lisp.

As a teenager, there was one particular boy at school who made my life miserable for years. I stopped being able to sleep and used to get up and walk around downstairs. One day my mum found me and eventually I told her the reason. Next day at school, in every lesson the teachers rearranged the seating so I was placed on the opposite side of the room to the boy. Things were instantly better.

Growing up I only knew one other person who had a CLP. He was a friend of my brother who had left school and was training to be a car mechanic. Then we found out that he had committed suicide. After that I knew no-one else who was like me.

I loved going to the dental hospital - I remember them being very kind. I had several X-rays and OPGs, and back in those days you used to get a glass of lemonade for keeping still - how cool is that? Finally my braces came off and I was presented with a false tooth on a plastic plate. I was 13 and I began to smile - I loved smiling. When I was 15, I found punk rock. Punk didn’t care what you looked like. I started reading about politics and environmental issues, joined a punk band and just started enjoying life and having friends.

At 16 I had my nose broken and reset to try and improve my breathing, and at 17 I had a bone graft to pack some bone from my iliac crest into the cleft to close it up. This stopped crisps getting stuck in the cleft and drinks didn’t come down my nose, but it also meant I could not wear my false tooth until it healed. So, sixth form was spent with a big gap in my front teeth. When I finally got a new tooth it was glued in, so I didn’t even have to take it out for cleaning. My big smile came back.

Over the years my cleft lip has become a smaller issue in my life although there have been times when it’s caused me problems. Here are just a few:

As I get older, there are a few things I would like people to know:

I would probably not be the same person if I hadn’t lived the life I have. On the whole my life has been pretty brilliant and what has made it brilliant is the true friends I have made along the way and the support of my family. They see me as a whole person, not just a person with a cleft. For children with CLP born in other parts of the world, life can be much more difficult with a lack of corrective surgery or the inability of families to pay for it.  Smile Train is a charity which has supported more than 1.5million cleft surgeries globally and gives children with clefts in poorer countries the chance to smile.

I do believe that society is gradually becoming more inclusive but there are still those who think it’s okay to be cruel to people who are different. Today this is not just considered bullying but is classed as a hate crime.
Wearing a mask has made me the same as everyone else. My full tweet said: ‘I am quite enjoying wearing a mask. I was dispensing a CT colonography prep last week and the patient said I had beautiful eyes. I’ll take that. I have a cleft lip and alveolus and I don’t think people usually notice my eyes. My eyes ARE beautiful.’  Would I really want to be like everyone else?  It has taken me half a century to get to this point, but no I don’t think I would.

Resources
Cleft Lip and Palate Association: www.clapa.com
Smile Train: www.smiletrain.org.uk
Changing Faces: www.changingfaces.org.uk
To report a hate crime call 101 or go to www.report-it.org.uk. If you are in immediate danger from hate crime or witness an incident in progress, call 999.