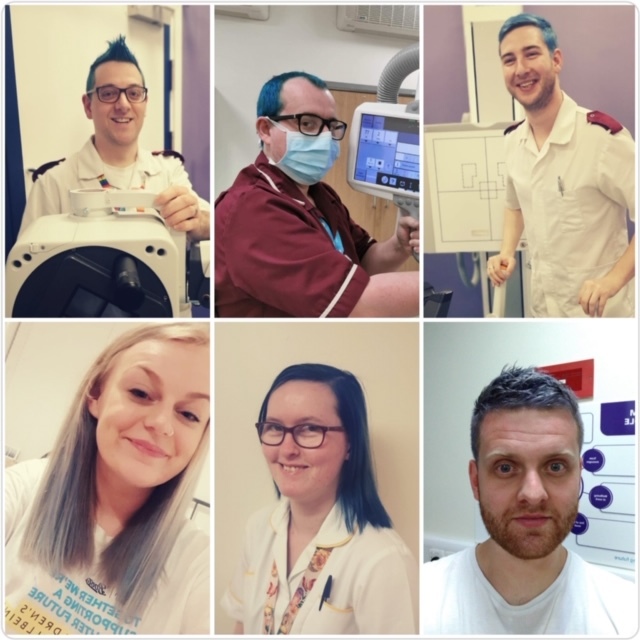 Northumbrian radiographers get the blues!

Radiography staff at Northumbria-Healthcare NHS Foundation Trust have dyed their hair blue to support the #makeitblue campaign, which is gathering momentum across the UK.

Debbie Henderson, lead radiographer at the trust, said, "A conversation in the staffroom sparked the idea. Colleagues were talking about what others were doing to support the #makeitblue campaign across the country, and how massively the Thursday night #clapforcarers campaign had taken off, and we wanted to do something ourselves, something different.”

Tim Hayward, trust clinical tutor, approached Superdrug and Schwarzkopf and they kindly donated hair colours and bleach. “Some DIY haircutting, bleaching and colouring later and this is the result!” said Debbie.

“It was a bit of a risk, with no hairdressers available to repair any damage, and of course no-one was certain how their hair was going to look.

"However, mostly the staff have been pleased with the results, especially the boys! And we have had some great feedback from the patients, who love it.

“The main thing was to do something lighthearted; it is so important to make people smile in a time when there is not much to laugh about, and it has resulted in really raising morale within the team. It’s also a very good method of hiding your roots!

“We have plenty of dye left, so if anyone else in the hospital wishes to do the same then they should just let us know,” said Debbie.

The #lightitblue campaign began about four weeks ago when some of the country's most iconic venues were lit-up in blue to coincide with first night of applause on 26 March for the NHS and frontline careworkers. Following on, the #makeitblue campaign encourages businesses and the general public to ‘go blue’ and to share their ideas, images and videos online.