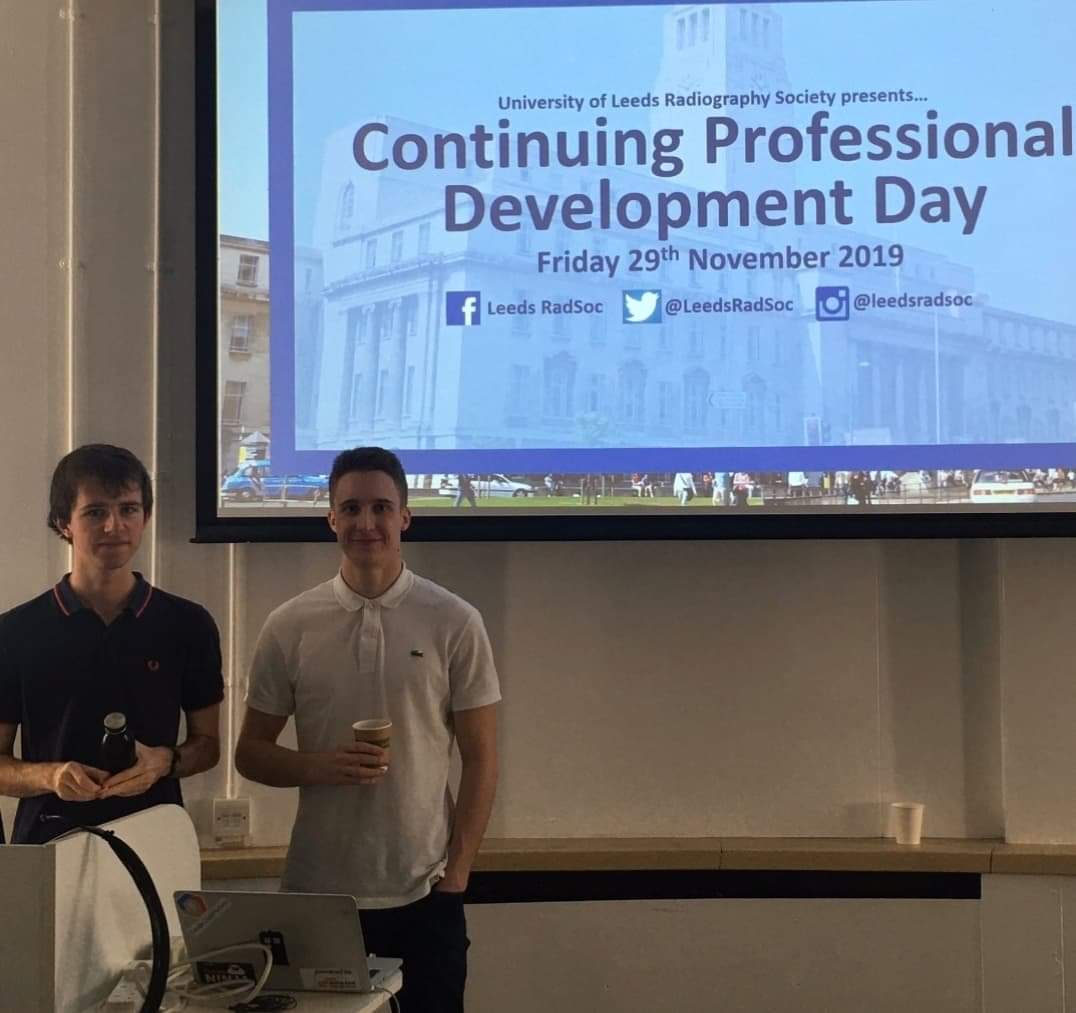 The series is to appeal to students and professionals

Adam January and Kieron Fox fast became friends when they started university in 2018. They set up a series of Radiography Evening Webinars that give to not only their fellow students, but, hopefully, attract new students and even share knowledge with other professions.

We spoke to Adam and Kieron about why they set up the webinars, what they hope student radiographers will get out of it and what they’ve learnt from their experience.

The Society of Radiographers’ student festival is a month of activities to support students for success in their studies and career.

Both Radiographer Assistants at Leeds Teaching Hospitals, the pair are hosting five webinars over Zoom and Youtube from 18 February to 18 March.

Kieron: ‘The idea was initially set up because we're both learning, but since it's such a wide spectrum of different topics and disciplines that are involved, it's pretty hard to cover things that are even important things to do with our degree in lectures. I think it's important that people get the opportunity to enjoy and learn about all the different aspects of radiography.’

Adam: ‘It'll give the opportunity for a specialist speaker in radiography to present what they've been doing recently, a snippet of their career or what their recent research findings are, and then, hopefully, we plan to allow people to have a short session for questions and answers.’

Adam: ‘One thing we're trying to do is get involved with some of the local colleges, both from where we're from in and around Leeds and York, and where we've been on placement in the last few years, to try and improve engagement with webinars like this in the local area. I know it's something we both like to be involved with in terms of increasing the attractiveness of healthcare degrees to students. It's a good age to get someone interested in specialist areas of radiography, pique their interest and get them to look into the degree.’

Adam: ‘The first one we've got with President Chris Kalinka and CEO Richard Evans is an overview of the profession and gives opportunities for questions, so that'll probably be more appropriate for those students. But, of course, they're welcome to come on to any of them.’

Kieron: ‘The Chris Kalinka and Richard Evans’ one's got an overview of lots of different things in terms of anecdotes, their career and organisation. Questions for that applies to pretty much anyone who's interested in the profession and wants to continue further. But then we've got ones likeDr. Hari Trivendi, he's a specialist in artificial intelligence, and I could imagine that there's probably certain people in the profession who will want to find out about the future of that, and that's something I'm interested in. I'm writing a dissertation on artificial intelligence, and I don't think people have realised what it could do to the radiography profession. I think it's good to listen to the research from someone like Dr Hari, so that they can start paying more attention. Each talk does have its own specialist area, it’s just some are an overview and some are specific.’

Adam: ‘We've realised that there's quite a lot of crossover with other professions like trainee medics who might be interested in the potential for AI, and people who are potentially going to be radiologists. We've got a talk from researcher Jackie Matthew to do with cranial and facial abnormalities, and we think that could be helpful to midwives, so it's nice to open up these different sessions to different professions and promote that.’

Kieron: It's not just the talks themselves that we learn from. Speaking to all the people who are close to the top of the profession, it's good to just get the opportunity to work with and communicate with people like them and set up these things.’

Adam: ‘We’re both third year diagnostic radiology students, we’re both from the NorthEast. We’ve both got an interest in organising things like this and it was a kind of coming together.’